The theme of the night was enlightenment – not simply in the age of science and art, but also in regard to disability and perceptions of it.” Read on for the verdict on the Paralympics opening ceremony. 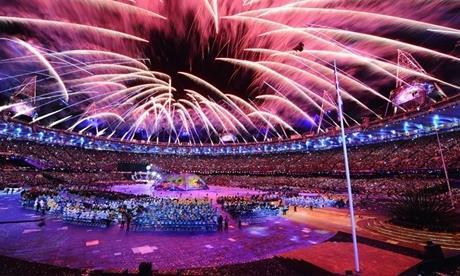 “It was the type of thing Channel 4 does well: slick, modern, fresh – like one long sportswear advert. The introductions to some of the competitors, like 7/7 bombing victim Martine Wright who will be playing in the volleyball, were informative and moving without being patronising.”
Jim Shelley, The Mirror

“As if to underline the point that imperfections were to be celebrated rather than feared, Sir Ian McKellen appeared as Prospero, borrowing characters from The Tempest but replacing Shakespeare’s poetry with something more bureaucratically serviceable for the occasion: “shine your light on the beautiful diversity of humanity” he ordered, before enjoining Miranda to go off on some adventure of her own.”
Tom Sutcliffe, The Independent

“The theme of the night was enlightenment – not simply in the age of science and art, but also in regard to disability and perceptions of it. “O, wonder! How many goodly creatures are there here!” the Tempest’s Miranda, eyes of the show, told us. “How beauteous mankind is! O brave new world, That has such people in’t.” As an enormous version of Marc Quinn’s Alison Lapper fourth plinth sculpture sat naked, unapologetic in the centre of the stadium, I felt the hope no one at home could disagree.”
Frances Ryan, The Guardian

“The most symbolic moment was not the homage to the human rights act, or the arrival in the stadium of a large-scale reproduction of Marc Quinn’s statue Alison Lapper Pregnant. It was when Sir Ian McKellen, playing Prospero, encouraged Miranda to fly upwards and smash through a glass ceiling. That is what millions of us are going enjoy over the next 10 days: the sight of blind footballers, wheelchair athletes and one-legged swimmers smashing glass ceilings as they confound our assumptions about what disability entails.”
Jim White, The Telegraph

But despite the faults — the infuriating adverts, the lack of a fancy trackside studio within the stadium, and the absence of a clear commentary on an often muddled, science-heavy ceremony — Channel 4 handled the event with great sensitivity and, once the athletes’ procession got under way, with great knowledge.
Mike Mulvihill, The Times