TV Critics: Peaky Blinders; Who Do You Think You Are?; Scrotal Recall; Detectorists 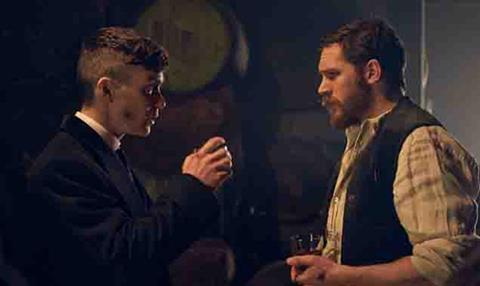 “Peaky Blinders is setting the bar very high for British drama. Cinematically, each episode is a work of an art, and the scripting remains tight and punchy despite confusing plotlines and multi-layered characters.”
Neela Debnath, The Independent

“Tom Hardy achieved something impressive last night: he managed to be the most menacing person in Peaky Blinders, a series in which everyone is capable of slicing someone else’s face off without prior notice. The only problem with Hardy’s brief appearance was that I kept hoping he’d turn up again, and he didn’t.”
Tim Dowling, The Guardian

“Hardy’s Alfie Solomons was a flamboyant cross between Oliver Twist’s Fagin and Joe Pesci in Goodfellas – but the Shelby vs Solomons stand-off didn’t quite deliver on promised thrills.”
Ellen E Jones, The Independent

“The accents were particularly dodgy in this episode – but no matter, because the cinematography was sublime. The opening sequence, of Tommy being stretchered through the streets to the strains of PJ Harvey’s Broken Harp, summed up everything Peaky fans have come to love about this jagged gem of a drama.”
Sarah Rainey, The Telegraph

Who Do You Think You Are?
BBC1

“Twiggy was a refreshing celebrity to take on the challenge of digging up her past in the 100th edition of Who Do You Think You Are?. She dealt with it all – every revelation, from her great-aunts’ and uncles’ time in the workhouse to her great-great-grandmother’s criminal past – with admirable cool-headedness.”
Sarah Rainey, The Telegraph

“In many ways it was a vintage edition, with Twiggy discovering not only the usual tales of poverty and premature death in her family but criminality, mainly involving counterfeit currency. Deliciously, her jailbird great-great-grandmother eventually met her maker crushed in a clothes sale.”
Andrew Billen, The Times

“The best WDYTYA? episodes feature celebrities who wear their hearts on their sleeves and Twiggy was thrilled every time a historian presented with her with another bundle of documents, despite the fact that most contained more bad news.”
Ellen E Jones, The Independent

“There is so much wrong with the new sitcom Scrotal Recall that the really funny thing about it is that it is funny at all. Why is it even a little funny? Partly, it’s because Tom Edge writes good one-liners, particularly for women. And partly too because, despite the title, there is an innocence to this comedy and a rare optimism.”
Andrew Billen, The Times

“Detectorists is what might be called a gentle comedy, if the adjective didn’t imply a lack of bite and sophistication. It manages to capture the pathetic spite of detectorist territorial disputes without compromising the dignity of its main characters.”
Tim Dowling, The Guardian

“This is what TV looks like when the volume isn’t turned up to 11. It’s a rarity nowadays, but a refreshing one.”
Christopher Stevens, Daily Mail