“This is very funny women at their very funniest.” Read on for the verdict on last night’s TV 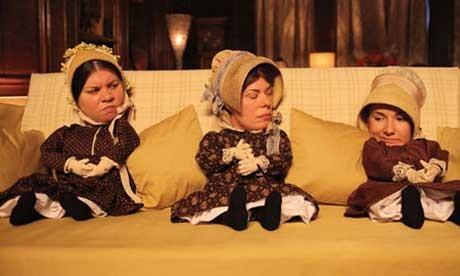 “The idea – famous people from history visit a modern-day therapist – isn’t entirely new, I don’t think. But it’s written, by a vast team of writers, with such originality and wit, imagination and cojones, that it feels like a whole blast of new… They all seem to be having such a brilliant time doing it, it’s impossible not to get swept along in the tide of fabulousness and sharp writing and cleverness-meets-silliness, with just a pinch of coriander lunacy. This is very funny women at their very funniest.”
Sam Wollaston, The Guardian

“The writing is often excellent and even the spaces between the sketches are drily funny. But it would be unfair not to give due credit to a performer who could easily get overlooked, since she’s the foil and not the funny woman: Rebecca Front gets bigger laughs doing virtually nothing here than some of her co-stars do with a string of punchlines.”
Tom Sutcliffe, The Independent

Up The Women, BBC4

“Fans of Spaced may disagree, but on the basis of this, Jesicca Hynes is a better comic performer than she is a comic writer… It’s not bad, it’s just a bit staid. The fact that it’s centred on a non-typical sitcom subject (the suffragette movement) can’t disguise that it is a rather ordinary, old-fashioned sitcom. The door opens, someone comes in, does a gag, cue studio audience laughter.”
Sam Wollaston, The Guardian

“Hynes pulls off the trick of writing an old-fashioned ensemble comedy very well indeed. Her basic setting, a church hall that is the regular meeting place for the Banbury Intricate Craft Circle, summons memories of Dad’s Army and there’s something familiar too about the comic characterisation, as neatly differentiated as a box of crayons… The whole cast give off the confidence of actors who know precisely who and what they’re meant to be, and so can polish their performance with something extra.”
Tom Sutcliffe, The Independent

“Up-and-coming actor Joe Cole was terrific as Stephen, by turns charming, enigmatic and brutally odd. Craig Roberts, who played his friend Carl, was somewhat subdued in comparison, but the relationship worked well. Cargese was a brave and surprising choice of debut for Matt Smith. He carried it off with aplomb.”
Ian Hollingshead, The Telegraph

“Thomas Penn writes rather better than he presents; he has a habit of injecting melodrama into inappropriate sentences and more than one theme was introduced, only to be left dangling unresolved. Yet he is a serious historian, at his most enthusiastic when taking off his shoes to walk on the Cosmati pavement in Westminster Abbey or donning his white gloves to leaf through Parliamentary archives. It was a good story, well told.”
Ian Hollingshead, The Telegraph