“It looked great, its pace did not let up and the distractingly starry cast acted its socks off.” Read on for the verdict on last night’s TV. 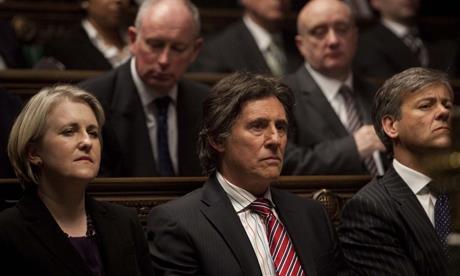 “This may have just about credible characters, but otherwise the real world has been abandoned. It’s been sexed-up and Spookified for the attention-deficit 21st century, with big explosions and downed planes, spy-cams pointing every which way, and glamorous young staff at GCHQ. Heaps of fun, but not a whole lot more.”
Sam Wollaston, The Guardian

“The clichés of political conspiracy theories all report loyally for duty. Present and correct are the wicked American multinational, all-hearing spooks, the plucky but glamorous investigative journalist, the former intelligence officer who’s a burnt-out-case, the Machiavellian chief whip, and the decent public official who tops himself… So why did I enjoy it? Because it looked great, its pace did not let up and the distractingly starry cast acted its socks off.”
Andrew Billen, The Times

“I’m guessing it will find a happy audience among those who like to have their prejudices reinforced and aren’t too fussy about the realism with which it’s done. Me, I’m wondering whether I’ve seen enough.”
Tom Sutcliffe, The Independent

“It’s a deeply, soundly, solidly good drama with a great cast and gallons of intrigue. But we’re a less shockable audience than we were in 1988 and the central premise that the country is run by super-powerful individuals who don’t give a stuff for the democratic process looks not so much like a scary plot as a fact of daily life.”
Matt Baylis, Daily Express

“It lacked any kind of coherent plot or much in the way of jokes. It did have a very impressive cast – all of the originals having succumbed to somebody’s arm-twisting to turn up for the 30th anniversary reunion. What a pity the laughs had a previous engagement.”
Tom Sutcliffe, The Independent

“Comedy has moved on; what was once anarchic now isn’t. This kind of pastiche feels tired (was it ever that funny?), certainly laboured over an hour. Someone left the top off the ginger beer, for 30 years. No fizz left; it’s warm and flat.”
Sam Wollaston, The Guardian

“The performances of Dawn French, Jennifer Saunders, Peter Richardson, Ade Edmondson et al were delightful, but no one seemed sure what the joke was this time around. Still, it solved the mystery of Five Go To Gold. C4 must have seen the script.”
Andrew Billen, The Times