“The director couldn’t get past the layers of its subject’s self-delusion.” Read on for the verdict on last night’s TV. 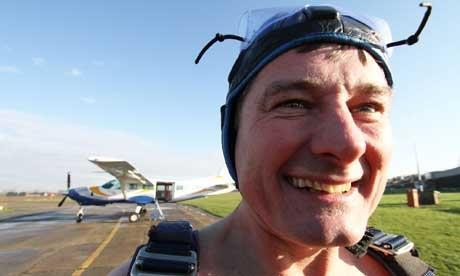 Streak! The Man Who Can’t Keep His Clothes On, C4

“The most disturbing thing about this film wasn’t the occasional sighting of Mark’s todger, it was the lingering feeling of grubbiness that came with it. Mark was broke, had had an abusive childhood and was clearly desperate for attention. Many of the scenes felt set up to voyeuristically exploit his neediness. He needed therapy, not a documentary.”
John Crace, The Guardian

“Despite showing him plotting his actions with friends in low-lit pubs, and despite the menacing Reservoir Dogs soundtrack, Streak! never convinced me that anything was at stake other than a police caution. The director couldn’t get past the layers of its subject’s self-delusion, and by the end Roberts had lost his nerve, avoiding the spontaneous thrill of streaking and plumping for a pre-arranged naked skydive.”
Bernadette McNulty, The Independent

“The whole film about this extraordinary man was tinged with sadness… The more we saw of Roberts, the more it seemed that streaking was a kind of escape, literally flinging off his clothes and running from an existence that wasn’t satisfying.”
Matt Baylis, Daily Express

“I feel bad for saying this about such a worthwhile campaign, made by someone with the best of intentions, but it was really dull. I got the point in the first minute and neither Hugh nor I had anywhere else to go thereafter. It would have been a lot more fun if he had decided to investigate how many seahorses there are pulped into the average fish finger. So here’s a plan: sign up for Hugh’s petition online right now and save yourself and your conscience the bother of watching the second instalment.”
John Crace, The Guardian

“Saving our seas is a project on a different scale [to the last Fish Fight], involving the creation of no-fishing zones all round the world… Enlightened commercial self-interest would demand conversation now, but the programme was vague on the mechanics of persuading some of the world’s poorest fishermen and most venal governments to wake up to it.”
Andre Billen, The Times

“There’s a bit of Mad Men glamour in the hourglass form of Carrie-Anne Moss, who plays an Assistant DA, and Michael Chiklis goes through the motions as the lethally mercurial Vincent. But you’re likely to end up thinking wistfully of De Niro and Joe Pesci, and of the series this might have been.”
Tom Sutcliffe, The Independent

“It turned out that Vegas belonged not to the new TV of novelistic depth but the old one of formulaic detective plots that race unconvincingly to their conclusions within each single episode.”
Bernadette McNulty, The Independent

“Always fun to watch this kind of thing, but I suspect that most viewers are canny enough as buyers to realise that the promised ‘insider tips’ on getting a bargain are not quite as advertised. ‘Buy women’s fragrance in the January sales for Mother’s Day’ ran one of them. Don’t tell too many people, will you?”
Tom Sutcliffe, The Independent

“My heart sank when Britain’s Secret Shoppers began with its frontman, entrepreneur Justin Preston, telling us that Britain is too polite and to become more pushy… He certainly failed to convince me that I could become a savvy, money-saving shopper by following his tips.”
Matt Baylis, Daily Express