“If only Olly Lambert had taken some students with him it might have got the publicity it deserved.” Read on for the verdict on last night’s TV. 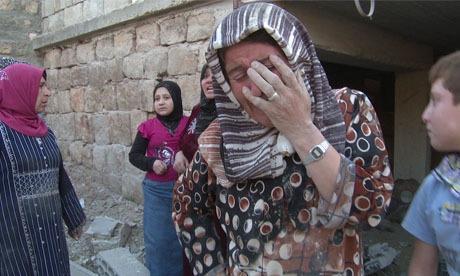 Syria: Across the Lines, Channel 4

“Olly Lambert’s astonishing programme compelled you to face the brutal truth of the civil war. Though it was discomfiting to watch at times, Lambert’s show was far superior to Dan Snow’s analysis in his recent BBC programme. Rather than relying on government officials from the relative safety of Damascus, Lambert reported the experiences of the people actually fighting this dirty war: rebels and Assad loyalists… Lambert has shown great bravery in getting the footage and if the programme sails close to war voyeurism that is preferable to sanitised news coverage.”
Sameer Rahim, The Telegraph

“I like war documentaries about as much as I like war, but Ollie Lambert’s film was different. It was not about the clash of armies but of neighbours who, on either side of a river in west-central Syria, had taken to killing one another… Lambert’s bloody, brave, and bloody brave film took no side, nor did it attempt to explain religious and ideological division that prompted war.”
Andrew Billen, The Times

“If war reporting has any value at all, it’s to show how humans live in the midst of death. Syria: Across the Lines was a brave bit of film-making in this regard, deftly capturing the absurdity and the pathos of the struggle in Syria while never sidestepping the main horrors either… This, I couldn’t help feel, was a far more honest account of war than Black Hawk Down or Bravo Two Zero: all the ugliness and the stupidity and precious little of the heroics.”
Matt Baylis, Daily Express

“Film-maker Olly Lambert spent five dangerous weeks in the Orontes river valley, where until recently Alawites and Sunnis lived in peaceful coexistence. Now they shoot at each other across the river, while crops rot in no man’s land… The front line is a long way from the political and ideological forces driving the conflict. As one rebel leader said dismissively of a totally unobserved ceasefire: ‘These decisions are made by people who live abroad.’”
Tim Dowling, The Guardian

“A brave, revealing, depressing film. If only Lambert had taken some students with him it might have got the publicity it deserved.”
Tom Sutcliffe, The Independent

Click to read Broadcast’s Behind The Scenes feature on Syria: Across The Lines

“[John Ware’s film] confirmed a truth touched on in Lambert’s film – that religious zealotry can force itself into the tiniest crack between communities and open it wider, and it presented a bleak prospect for the future.”
Tom Sutcliffe, The Independent

“Though the programme didn’t present a new argument, it was interesting to hear how some Israelis are rethinking the future. The comedian Sayed Kashua has a successful sitcom series that mines the everyday tensions between Israeli Jews and Israeli Arabs. It might not seem much but laughing together is a step in the right direction.”
Sameer Rahim, The Telegraph

“You couldn’t help feeling there was a lot of sense being talked here and that the simple desire for a peaceful beer on the beach might do more to unite people than any sacred book or political creed.”
Matt Baylis, Daily Express

“There was calculation behind the narrative’s trajectory: the boy has bitten off more than he can chew; the pressure is too much for him; he’s only 18 after all. The result was the sort of car crash you suspect has been engineered for the insurance… This was ostensibly a documentary about a talented but overambitious young lad who would learn from his mistakes before he jeopardised a bright future. But I’m afraid I came away thinking that all the difficulties at Sanctum on the Green could have been overcome more quickly if everybody had just shut up and listened to Luke.”
Tim Dowling, The Guardian