“It was such fun you might forget the horrible irony of cooking ingredients going to waste in the cause of the starving.” 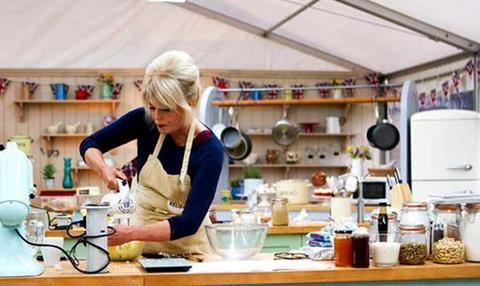 “Charity editions of hit programmes rarely work. They’re self-indulgent and sanctimonious, and we end up watching them out of a sense of duty. This one was better than most, because the contestants were not simply relying on their celebrity status to supply the entertainment: they brought jokes they had prepared earlier.”
Christopher Stevens, Daily Mail

“I did not tune into The Great Comic Relief Bake Off with much joy. More fool me, because it was quite fun. It was refreshing to see four contestants who weren’t planning to launch their own cup-cake businesses. Instead, they had a bit of a laugh.”
Matt Baylis, Daily Express

“There is sometimes some ovaries talked about women not being as funny as men or lacking the competitive urge needed to excel on panel games. In a joyously edited special edition of Bake Off, Jennifer Saunders, Joanna Lumley, Lulu and Dame Edna Everage mastered not cake-making but the hilarious art of self-deprecation. It was such fun you might forget the horrible irony of cooking ingredients going to waste in the cause of the starving.”
Andrew Billen, The Times

“It was Joanna Lumley and Dame Edna who stole the show, one resembling a half awake Duchess who’d wandered into the servants’ quarters by mistake, the other gleefully skating around the Bake Off marquee, mashing cake mix between her fingers like a toddler on shore leave. Both on fine form.”
Chris Bennion, The Independent

“Only the splendid Dame Edna, coaxed out of retirement, managed to combine terrible incompetence with monstrous self-assurance, thus furnishing the programme with virtually all its comic highlights. With savage delicacy, she managed to mock The Great British Bake Off without spoiling the fun.”
Tim Dowling, The Guardian

“This wasn’t a patch on the regular Bake Off – it lacked any genuine tension or jeopardy, missed Giedroyc’s chirpy presence, and watching the judges pull their punches weakened its impact – but it will tide us over until the sixth series this summer.”
Michael Hogan, The Telegraph

“Those expecting a sumptuous glorified soap like Downton Abbey seem to have forgotten that it’s airing on BBC Two, not BBC One – a sign that it’s pitched more as a weighty political drama than a mainstream blockbuster. As far as I’m concerned, the naysayers should be slung in the Tower to rot.”
Michael Hogan, The Telegraph

“Mantel’s infatuation with Cromwell continues to be the weak point of the drama. This man was in reality a bully, a weasel and a lunatic — like Alastair Campbell, Peter Mandelson and Tony Blair in one skin. Rylance is playing him as a sad-eyed saint, quivering with empathy.”
Christopher Stevens, Daily Mail

“Wolf Hall shifted gear from last weeks’ salty frenzy of fireside threats and corridor-based titillation, and offered up a more sober, more sombre affair that dealt with the ramifications of one very unwanted child. It was heart-breaking to watch Foy’s increasingly haunted Anne realise that her grip on power is slipping.”
Chris Bennion, The Independent

An Idiot’s Guide to Politics, BBC3

“Rubinstein’s main thread became tackling the “problem” of MPs telling lies in Parliament. To that end, he began a Change.org petition to ban lying in Parliament. The main lie that has upset young Britons wasn’t made in Parliament – it was the Lib Dems’ manifesto pledge not to raise tuition fees. So, half of this show was devoted to a ban that wouldn’t even have changed the thing that most young people are angry about.”
Will Dean, The Independent

“An Idiot’s Guide to Politics was a scattershot affair – good in parts, but terribly unfocused and occasionally irritating. Rubinstein is given to stunts that rely on excruciating confrontation, some of which make a nice point, some of which make him seem a tiresome, thick-skinned troublemaker. If anything, this would have convinced young people that politics ain’t worth bothering with.”
Tim Dowling, The Guardian

“On one level it was deeply impressive. At another level, it was deeply worrying. In Afghanistan there is a good case to be made that General Petraeus’s quintupling of night raids wrecked his predecessor’s attempts to build trust. Did we become the Taliban’s recruiting sergeant? Could our brilliance at industrialised murder have created Isis?
Andrew Billen, The Times