“A format that takes hopeful innocents and torments them for our entertainment.” Read on for the verdict on last night’s TV. 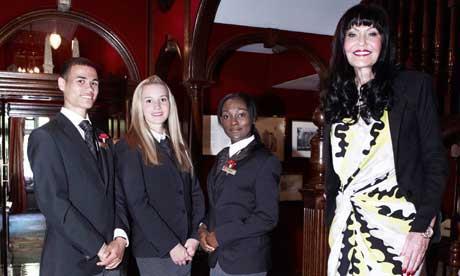 “The Intern is basically the Apprentice by another name: a bunch of hopefuls jumping through fairly pointless hoops for the television cameras under the guise of competing for a job… Some of it was passably entertaining, but there wasn’t even a pretence at creating a level playing field by which to judge the contestants’ credentials.”
John Crace, The Guardian

“Hilary does the boilerplate stuff about putting her name on the line but the truth is that she’s already besmirched her reputation by getting involved at all… I doubt that a jobless young person watching would have learnt anything useful about the world of work – the only possible excuse for a format that takes hopeful innocents and torments them for our entertainment.”
Tom Sutcliffe, The Independent

“We were set up for blood sport, but that’s not what we got. The Intern is The Apprentice for a generation facing the grim prospect that more than a million 18-24 year-olds are unemployed… The big disappointment was Devey. She proved oddly maternal and offered no genuinely helpful advice. There’s an irony here: Sugar’s iron fist gives The Apprentice its punch – and longevity – while Devey’s kindly manner may be the death of her own show.”
Florence Walters, The Telegraph

“Hilary Devey responded to the crisis in youth unemployment by setting three young jobless people to compete for a ‘managerial’ job at a five-star hotel. As if free internships are not humiliating enough, she employed actors to play ‘difficult’ guests, and then critiqued her supplicants if they failed to pacify them… Her credibility was denigrated the moment she signed on to this farrago.”
Andrew Billen, The Times

“I couldn’t help feeling that if the true motive was to give young people a fair go, the people behind the programme would surely have got Devey thinking up ways to train and employ lots of them, not just compering stunts reminiscent of Candid Camera for a trio in a Kensington hotel.”
Matt Baylis, Daily Express

“It started well enough, with the LAPD successfully using data about past crimes to predict the locations of future ones: Minority Report in action. But after that, it rather fell apart by spending the remaining 45 minutes telling us stuff we already know. We know there are loads of people out there collecting and mining bits of data for personal and public gain, but the fascination lies in knowing how to work out which patterns are going to prove productive, and not in the sheer levels of activity themselves.”
John Crace, The Guardian

The High Art of the Low Countries, BBC4

“Graham-Dixon made a fine job of boiling down a complex and quickly shifting period of art history into a simple narrative, even if he did make it look like an unenviable task… He was at his best at the end, explaining why he thinks Rubens achieved ‘the ultimate expression of a fantasy that had obsessed people here for centuries’, by making sex (or at least sensual art) seem pious. It was a thrilling conclusion to reach, if a typically Italy-centric one.”
Florence Walters, The Telegraph