TV Critics: The Tunnel; Hello Ladies; Veep; The One and Only Cilla Black; Out There; Britain's Booming Cannabis Business

“It’s atmospheric, intriguing, gripping, with interesting, complex characters and strong performances. It’s just that it’s exactly the same as the original.” Read on for the verdict on last night’s TV. 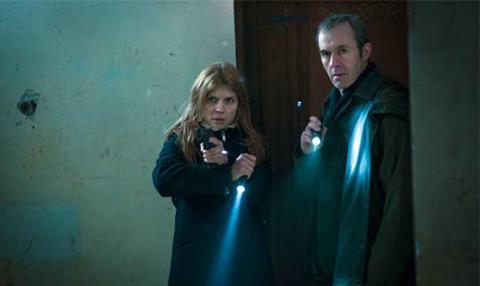 “It’s atmospheric, intriguing, gripping, with interesting, complex characters and strong performances (from Clémence Poésy and Stephen Dillane as the leads). It’s just that it’s exactly the same as the (recent) original… The only possible reason for doing it – so soon and so identically – is to get rid of the subtitles. Except this has them!”
Sam Wollaston, The Guardian

“What could be gained by relocating the drama to the Channel Tunnel? On the basis of last night’s opening episode – which at times felt more like a shot-for-shot copy of The Bridge than any effort to reimagine it – not a lot. But that doesn’t mean it wasn’t a well-made, even thrilling hour with plenty to grip and shock.”
Gerard O’Donovan, The Telegraph

“Should you bother watching The Tunnel even if you’ve already seen the original? The early signs are good. The makers obviously have sense enough to preserve what was effective about the original, and invention enough to distinguish their work too.”
Ellen E Jones, The Independent

“Bridge fans will want the writers, led by Ben Richards, to vary the story. Until they do, much of our pleasure derives from the detail of Stephen Dillane’s performance as the randy but vasectomised Karl and Clémence Poésy as the beautiful but emotionally cauterised Elise.”
Andrew Billen, The Times

“Stephen Merchant’s sitcom about a geeky Brit in LA is gentler, and less awkward and squirmy than his collaborations with you-know-who. Not ground breaking, but nice. Which sounds less enthusiastic than I meant it to. It’s very likable.”
Sam Wollaston, The Guardian

“Merchant is an appealing performer, and good enough to pull off the trick of making a hopelessly selfish character amusing to the point of sympathy as he blunders his way through the LA dating scene. But this particular brand of cringe-making comedy has been done to death.”
Gerard O’Donovan, The Telegraph

“Stuart is a grotesque fold-out version of David Brent. As in his ventures with Ricky Gervais, Merchant demonstrates his belief that nasty is the new funny: you do not have to wait long for a disability gag. The physical jokes, however, are strong and the dialogue excrutiatingly good.”
Andrew Billen, The Times

“The dialogue was sharp and machine gun-like as ever… Julia Louis-Dreyfus is great in the role and her two Emmys for best-comedy actress are testament to her enormous popularity. For my money though, on this side of the pond, unless you’re an enthusiastic consumer of US politics, Veep is doomed to remain an acquired taste.”
Gerard O’Donovan, The Telegraph

“I don’t believe it, like I believed The Thick of It; it feels like an Englishman imposing Englishness on US politics. Still effing hilarious though.”
Sam Wollaston, The Guardian

The One and Only Cilla Black, ITV

“Her name was up in lights at the back of the stage, her adoring public hung on every word and her showbiz pals were out in force to shower her with praise… The show included tributes from singers Katie Melua and Alison Moyet. Both of their underwhelming performances cleverly emphasised last night’s main point: no one does it quite like Cilla.”
Ellen E Jones, The Independent

“The tribute creaked a bit in places. A cameo in Coronation Street was ham-fisted, and the recreation of her Saturday night game show Blind Date was rushed and too full of in-jokes… She performed Liverpool lullaby in a breathy croon — sheer schmaltz, but she made it touching.”
Christopher Stevens, Daily Mail

Stephen Fry: Out There, BBC2

“The second part of Stephen Fry’s investigation into global homophobia was overshadowed by his booming personality… He turned a confrontation with a detestable Russian politician called Vitaly Milonov into a media scrum, and then blustered through his questions… This was where Coming Out needed a serious journalist in charge.”
Christopher Stevens, Daily Mail

“Some might say that with many strong incentives, not least tax revenues and reductions in crime, this drug should be legalised. Countless others, I’m quite sure, would disagree. Whatever the merits of each standpoint, wouldn’t this film have been an ideal place to hear the arguments?”
Matt Baylis, Daily Express