“The odd moment of unintentional humour aside, it managed to provide some valuable and forceful insight.” 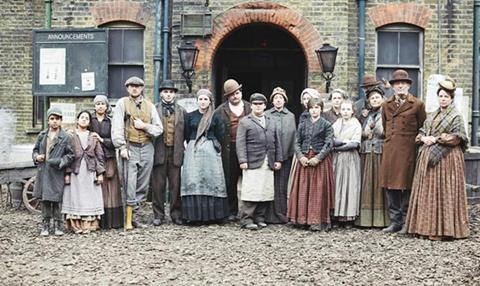 “This was an absorbing social experiment yet unlikely to persuade anyone that things were better before welfare, trade unions, state pensions and other new-fangled life-savers.”
Jasper Reees, The Telegraph

“The odd moment of unintentional humour aside, it managed to provide some valuable and forceful insight.”
Hugh Montgomery, The i

“This would have been fine as a straight documentary, but with that you wouldn’t get the self-justifying tang of emotional engagement this format brings. More viewers will watch the show done this way, so more will learn about the history of poverty.”
Andrew Billen, The Times

“There is nothing in it about slum or Victorian life that a 12-year-old won’t have already picked up along the way.”
Lucy Mangan, The Guardian

“What the programme needed was more detail, not more modern people emoting as they underwent their sanitised, televised experiment. Make a documentary, not another costume-clad reality show.”
Matt Baylis, Daily Express

“Truth be told, it did a less than stellar job at providing more than the barest outline of America’s ongoing and apparently increasing police brutality problem. But if it failed to unpick the problem, it at least provided a wealth of valuable stories from victims’ families.”
Lucy Mangan, The Guardian

“If answers were elusive, what Yates’s film captured well was the sheer energy and anger on the streets. There seemed to be so much unity, so much strength, so much will to change. So why no change?”
Matt Baylis, Daily Express

“It’s a mark of progress that a female mimic has finally got her own TV show, an accolade denied to Ronni Ancona and Jan Ravens. The writing is a bit uneven and won’t win any awards for subtlety.”
Jasper Reees, The Telegraph