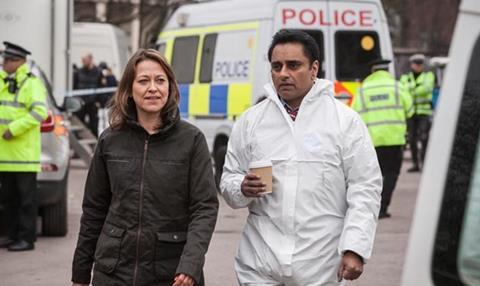 “Amid the noise, haste and ham-fisted plotting of so many crime dramas, it’s a relief to have Unforgotten. This is a wide-open case, which, it seems, will be shut slowly and thoughtfully over the next six weeks, using tools including understated acting, multi-threaded storytelling and old-fashioned police work.”
Andrew Billen, The Times

“At times Unforgotten teetered on the edge of cliché, not least in scenes of sub-CSI awe at the wonders of forensic science. That it never toppled fully into crime drama déjà vu was thanks to the strong, multi-stranded storytelling style of writer Chris Lang, who kept a swarm of supporting characters buzzing around on the sidelines.”
Gerard O’Donovan, The Telegraph

“I fretted that this frightening roster of talent presaged the arrival of a plump televisual turkey. But Unforgotten resolved itself by the close of its first episode into a promising whodunnit.”
Sean O’Grady, The Independent

“It’s magnificently cast. In a pairing I think I have subconsciously been waiting for all my life, Trevor Eve is married to Cherie Lunghi. If you cannot feel the joy of this, I cannot explain it to you.”
Sam Wollaston, The Guardian

“Writer Chris Lang has hit upon a brilliant format, taking the New Tricks concept of unravelling an ancient crime and adding layers of psychological darkness. The difficulty was that, with so many rich characters fighting to establish themselves, the opening episode felt cluttered.“
Christopher Stevens, Daily Mail

“In truth, a very British romance with Lucy Worsley began four or five years ago, when the BBC first discovered that the chief curator at Historic Royal Palaces could walk, talk and deliver nicely carved chunks of her knowledge to camera in an intelligent yet affable manner that informed, entertained and embraced everyone.”
Sam Wollaston, The Guardian

“You can’t deny it, young Worsley tells a cracking tale, rather wickedly, like some big sister passing on the facts of life.”
Matt Baylis, Daily Express

“The learned Ms Worsley has an intimate style of story-telling, and when she got to the inevitable Jane Austen bit I wondered whether her description of an early edition of Sense and Sensibility as ‘a tiny little thing, genteel, petite and with no indication of the dynamite that lies within’ might not be equally well applied to her.”
Sean O’Grady, The Independent

“The balance between gimmick and fact is one that many modern documentaries struggle with, and it’s something that Lucy Worsley is particularly brazen about. Doing her own re-enactments in full fancy dress, hers is an approach you either embrace the campness of, or sigh with relief that she’s better at history than at acting.”
Andrew Billen, The Times

“The landscapes were splendid and the Andean skylines at sunset were glorious. But heaven save us from ever spending half a day on a wet station platform with Chris Tarrant.”
Christopher Stevens, Daily Mail