“The programme that’s been trumpeted as the saviour of ITV sitcom is not a comedy at all. It’s a horror.” Read on for the verdict on last night’s TV. 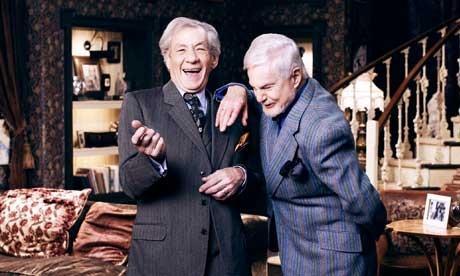 “What on Earth were they thinking? The makers of Vicious have squandered not only the estimable acting talents of Sir Ian McKellen, Sir Derek Jacobi and Frances de la Tour, but also the combined screenwriting welly of Olivier Award-winning playwright Mark Ravenhill and Gary Janetti (Will & Grace) on perhaps the least funny new comedy in recent memory… There are few art forms as subjective as comedy and I suppose it’s conceivable that someone somewhere watched this with tears rolling down her cheeks: perhaps Elaine Bedell, ITV’s director of comedy and entertainment, sobbing into her sofa as she realised that the programme that’s been trumpeted as the saviour of ITV sitcom is not a comedy at all. It’s a horror.”
Benjamin Secher, The Telegraph

“Some people will say this show is a landmark, not just because it’s a primetime, mainstream comedy about a gay couple but because it treats their relationship as a fact of life rather than as an oddity: a sort of one-gender Terry and June. I’d agree, if Vicious was remotely funny, but it isn’t, and that’s its fatal flaw. While representing something important and laudable the show is simply abominable. Jacobi and McKellen seem to have thrown aside their long-acquired acting expertise to do an awful camped-up routine best suited to a village hall panto.”
Matt Baylis, Daily Express

“Vicious is full of lines that have the cadence of comedy but often prove to be devoid of wit when examined more closely… The basic schtick is high-camp bitchiness, a form that reached an apogee in the American sitcom Will & Grace (on which Gary Janetti also worked). This is a sadly depleted version, though, and it’s delivered by McKellen and Jacobi as if they’re playing in Wembley Stadium and only the upper tiers are occupied, with a heavily semaphored effeminacy that seems to belong to an entirely different era.”
Tom Sutcliffe, The Independent

“Sirs Ian McKellen and Derek Jacobi are Acting with a capital A – thespian jousting. Take that darling, no you take that, ouch, you bitch. Which is rather fabulous… It’s just a shame that the vehicle in which they find themselves isn’t a better one. It’s not just old-fashioned, pre-Office TV comedy it’s also, frankly, a bit lame… I want a bit more artfulness, wit and surprise from my television.”
Sam Wollaston, The Guardian

“There’s a resolute old-fashionedness in the format: a studio sitcom where the laughter track is as unrestrained as the performances… The Vicious of the title is what our leading men are to each other, to their self-obsessed friends, even to the dead… But therein lies the strength of Vicious – it’s packed with zingers. It’s like Downton Abbey if the only character was Maggie Smith’s Dowager Countess.”
Alex Hardy, The Times

“While The Job Lot might borrow a tune from TV’s most enduring double act, it took pretty much everything else from a stationery suppliers in Slough. The comparison does this show no favours: where The Office was a triumph of acute observation, The Job Lot instead opted for obvious ideas, barely developed… Laugh? I’m not even sure I smiled. P45s all round.
Benjamin Secher, The Telegraph

“The Job Lot is full of those poised silences that are a feature of modern sitcom style, as non sequiturs falter to a stop or a character is left to silently absorb the absurdity of someone else’s behaviour. But there is plenty for you to laugh at yourself… Most importantly, the comedy lies not in the lines as such but somewhere between what’s said and how it’s said.”
Tom Sutcliffe, The Independent

“It’s not just about the delivery of one-liners, it’s about characters and situations that are nicely observed and recognisable. I love Jo Enright’s Angela, a walking tribunal who sucks the life and joy from the workplace. Every office has one, even this one… Nice performances from Russell Tovey and Sarah Hadland too, acting with a lowercase a, which is sometimes preferable and a relief after the other.”
Sam Wollaston, The Guardian

“It’s of-its-time: a collection of strivers and skivers, knocked by recession, discontent and dappiness. It also has star names: such as Russell Tovey and Sarah Hadland. But after the hothouse of Vicious it felt like they were lying in a tepid bath.”
Alex Hardy, The Times

“These docusoaps rely on drama and extraordinary characters. The Armstrongs – about Coventry’s third-biggest double-glazing firm, remember? – had that. This, in spite of a spirited rant from a baker called John about Paul Hollywood and his artisan nonsense, doesn’t. Also, this behind-the-scenes, fly-on-the-wall docu format is a bit stale, too (perhaps appropriately here?). And whoever came up with the title … well, they actually committed a crime.”
Sam Wollaston, The Guardian