TV Critics: W1A; Madam Secretary; Inside No. 9; The Last Days of Charles I

“A needle-sharp satire of the awful incompetence, arrogance and piffle of life within the BBC.” 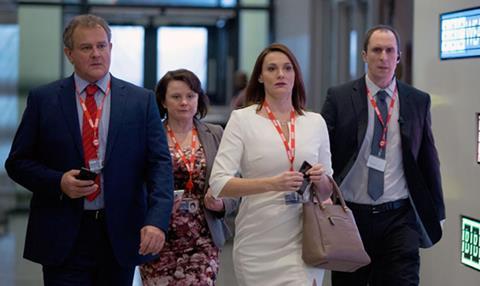 “Last night’s opener was witty, wordy and frantic, with David Tennant’s voiceover hitting the mark perfectly. If the bumbling buffoons of W1A are even halfway accurate then it’s little wonder all the political parties are promising to either reduce or freeze the licence fee!”
Claudia Connell, Daily Mail

“W1A is a needle-sharp satire of the awful incompetence, arrogance and piffle of life within the BBC. The problem is, when turned into a sitcom, this all starts to look very one-dimensional.”
Matt Baylis, Daily Express

“Satire should take the real world and run with it, gloriously, as The Thick Of It did. This takes the real world and goes back inside with it, it’s nibbling – not biting – satire. If you’re outside the metropolitan media bubble you might just find it annoying.”
Sam Wollaston, The Guardian

“This opening episode to the second series should have felt impressively prescient, airing so soon after Jeremy Clarkson’s real-life sacking. The fact that it doesn’t is proof of W1A’s greatest challenge to productivity moving forward (as it were); a BBC sitcom about the BBC will always be too cosy to be truly cutting.”
Ellen E Jones, The Independent

“View the programme as a universal send-up of corporate life and W1A is great fun. John Morton is the sharpest comedy writer on television, with an unerring ability to come up with ideas at once ludicrous and entirely plausible.”
Anita Singh, The Telegraph

“The lunatic internal logic of human resources departments and the contentless arrogance of brand consultants are so prevalent in business that much of the parody is of almost universal truths. As David would say, we are ‘status active’ for an enjoyable series two.”
Andrew Billen, The Times

“House of Cards is dark and surprising, Armando Iannucci’s Veep is enjoyably vicious and The Good Wife provides a useful glimpse at the kind of preparation for power that Hillary Clinton might have had. Madam Secretary isn’t in the same league as these shows – but Téa Leoni is likeable enough in the lead to make it work as glossy distraction.”
Ellen E Jones, The Independent

“The main plot of the pilot was resolved far too easily, but the teaser of the corruption storyline and the beginnings of some office-based tensions both suggested that the series was going to lay out a delectable spread of tension, intrigue and a dash of literate contemporary politics.”
Charlotte Runcie, The Telegraph

“Madam Secretary is The Good Wife crossed with The West Wing but lacks the sexual tension of the former or the political chops of the latter. Téa Leoni  acts glam and focused but her character is annoyingly perfect: polyglot, idealist, feminist, realist, loving mom, sexually active wife.”
Andrew Billen, The Times

“It is, as usual, a tightly wound and hugely impressive half hour. It’s certainly not new ground, but in the hands of Pemberton and Shearsmith it’s something special.”
Chris Bennion, The Independent

“Anybody used to the work of the show’s writers and stars, Steve Pemberton and Reece Shearsmith, will know their comedy always comes with a side order of pathos and weirdness. It doesn’t always work but last night it mostly did.”
Claudia Connell, Daily Mail

The Last Days of Charles I, Channel 5

“None of this was news to any history student, but the punchy countdown clock was a fresh way to tell the story and there were enough ‘I didn’t know that’ moments to keep it lively.”
Charlotte Runcie, The Telegraph

“There were some very poignant details. I might have cared even more had not the actor playing the King been sporting one of the daftest beards in the history of dramatic reconstructions.”
Matt Baylis, Daily Express