“Compared to Algonquin Bay, the murder-strewn backlands of Scandinavian serials such as Wallander and The Killing are an amusement arcade” 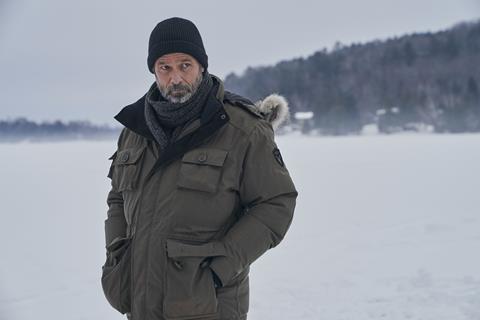 “It is generally an unbearable piece of pseudery to say that the location of a programme is another one of its characters but in Cardinal it is very close to the truth. The relentless freezing temperatures constrain people at every turn. It adds a sense of scale and an intensity to the (lean, muted) action that US or UK equivalents have to struggle to achieve. Cardinal provides that rare pleasure: a sense of something being better than it needs to be. It is slow without being frustrating or dull, thoughtful without being ponderous or pretentious.”
Lucy Mangan, The Guardian

“This has the feel of a daytime series or one of those cheap films they show at two in the afternoon on the more obscure drama channels, except every now and then we get a very grim shot of a maimed corpse. The series is based on Giles Blunt’s crime novels, I suspect the stories work well on the page. On screen they fill an hour-and-a-half in satisfactory fashion, while doing nothing remarkable. Where other shows have made a feature of their snowy locations – Fargo, Fortitude – here it just means they can do murder-by-hypothermia and everyone wears a parka with a furry hood.”
Anita Singh, The Telegraph

“The Canadian crime drama set in the snowy expanses of the fictional Algonquin Bay has been moved from BBC Four to BBC Two for its swansong, probably to fill lockdown programming holes. However, they should have done it sooner because it really is very moreish. There are notes of Fargo — fiendish murders in a tight-knit community; a sadistic, clever killer like Billy Bob Thornton’s character, Lorne, outwitting the police; the beautiful icy backdrop almost a sinister character in itself and certainly helping to freeze people to death — yet without the humour. There is very little that is light to be found here.”
Carol Midgley, The Times

“Cardinal’s problem is that the atmosphere is so bleak, dark and bitter that it verges on the unintentionally comical. Compared to Algonquin Bay, the murder-strewn backlands of Scandinavian serials such as Wallander and The Killing are an amusement arcade. The first victim this time was a politician’s husband, the second, a little old lady who grows orchids and feeds the birds.”
Christopher Stevens, Daily Mail

“You can see why the first three series of Cardinal were shown on BBC4. It has a lot in common with a minimalist art installation: chilly, impenetrable and, frankly, a bit boring. Cardinal and Delorme obviously have a bit of a thing/not-a-thing going on between the two of them, which is nice, but perhaps they could get cracking and open up to each other because, lorks, this show could do with some warmth.”
Rupert Hawksley, The i

“As tributes go, Bradley Walsh: Happy 60th Birthday was the equivalent of opening a shiny-wrapped present to discover a pair of your own socks lifted from the laundry basket. Of course it going to be a cuts job filled with clips from Walsh’s career, but couldn’t they have packaged it together with some new stuff? Like an interview with the man himself? Or least some interviews with people who admire him and might have some kind words to say about him? What we got instead was a little vignette from Walsh’s life interspersed with Walsh reminiscing about these things on Parkinson or This Morning, clips so old that we’re talking This Morning with Richard and Judy.”
Anita Singh, The Telegraph

“The human budgie was the subject of a fawning celebration that hailed every stage of his career from stand-up club comic to old-fashioned crooner, on Bradley Walsh: Happy 60th Birthday. ITV adores him, and will smother him with compliments if that’s what it takes to keep him. They shouldn’t worry. Whatever new twists Bradley is planning, retirement doesn’t look like one of them.”
Christopher Stevens, Daily Mail

“This turned out to be essential viewing. Clear-headed and immaculately sourced, this investigation shamed the Prime Minister and his hapless gang of fools. Forget accusations of editorialising. The facts were simply laid out before us and corroborated by multiple people. We know how things played out in the weeks leading up to lockdown; there’s no point in going through it all again. What was really striking about this film was the ferocity of the attacks on the Government. The gloves were off.”
Rupert Hawksley, The i