After Life; Martin Clunes: Islands of the Pacific

“The comedy’s depiction of grief, depression and friendship is tender and, at times, groundbreaking in its honesty.” 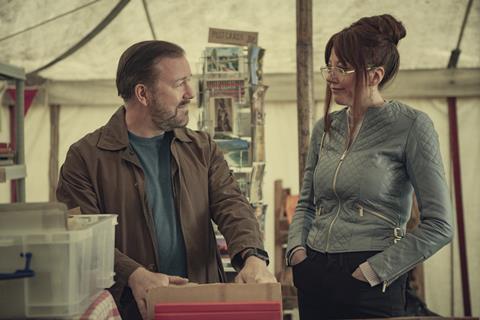 “The third and final series of Ricky Gervais’s wildly popular grief-com After Life begins superbly. It is, by far, the high point in another trite, mawkish, soggy pudding of a series, that wallows in its own cynical slurry pit of emotion and thin-skinned misanthropy. The emotions here – grief, sorrow, jealousy, anger, love – are not insincere, but they have the depth of a Post-It note.”
Chris Bennion, The Telegraph

“The comedy’s depiction of grief, depression and friendship is tender and, at times, groundbreaking in its honesty, but dig a little deeper and you’ll recognise After Life has little to say beyond that oft-ignored internet adage – ‘be kind’.”
Emily Baker, The i

“Ultimately, there are little things that endear you to After Life – among them a great soundtrack, a cast of characters who don’t all look like conventional TV stars, a standout performance from Diane Morgan and a brilliant cameo from Tim Key. But then it’s all undone by a descent into clumsy sentimentalism.”
Louise Chilton, The Independent

“It hardly needs saying (yet again) that it is irritating to watch processions of celebrities being paid by TV companies to swan off to fabulously exotic locations when many of us haven’t set foot abroad since 2019, by which I mean me (#bitter). But Martin Clunes is an amiable and un-smug travel guide, and French Polynesia is so ridiculously beautiful that it is hard to remain annoyed for long (although you can if you really try, I find).”
Carol Midgley, The Times

“Clunes apologised for the incursions of European settlers, especially the French who conducted dozens of atomic tests on the neighbouring atolls. Then he went swimming with sharks. He paddled an outrigger, too, and to his delight a pod of playful dolphins came to investigate. The whole trip, which continues next week, looked a delight. I just wish he’d left the guilt at home.”
Christopher Stevens, Daily Mail

“After two years off the screen The Apprentice seems to have collated the dimmest male team yet. Of course that may be deliberate, because failure is far more entertaining than smug success (and some of those women in the female team are teeth-itchingly smug). But it’s starting to feel as if the women are shooting fish in a barrel, so easily do they win.”
Carol Midgley, The Times

“This second instalment was somehow even more formulaic. This was TV as repetitive as a Zoom meeting spent frantically gesticulating at colleagues to unmute themselves. Plus ça change, plus c’est la même chose, as they probably used to say at Amstrad’s now-defunct Parisian branch.”
Michael Hogan, The Telegraph