Death On Daytime; The Ipcress File; One And Six Zeros

“The gargantuan trail of destruction left by The Jeremy Kyle Show is almost certainly too much to condense into one documentary but even so, it is a bombshell of an exposé” 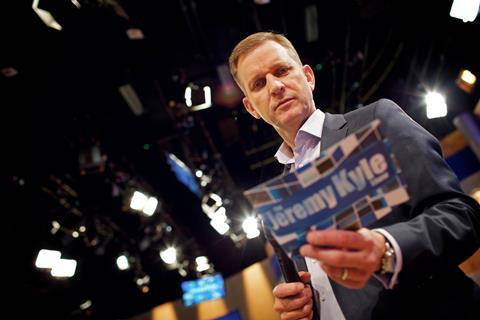 “The gargantuan trail of destruction left by The Jeremy Kyle Show is almost certainly too much to condense into one documentary (and no doubt this only skims the surface) but even so, it is a bombshell of an exposé that dissects how a programme fuelled by class contempt and fronted by an egotistical bully became what is surely one of the most toxic and exploitative empires in television history.”
Rachel Sigee, The i

“The film-makers persuaded three members of the production team to explain just how The Jeremy Kyle Show was made. They remained anonymous and their words were read by actors. This can often be deadening, but here was highly effective: it gave a real sense of how young and inexperienced they were – kids, really – some hired because their working class backgrounds would make them ‘relatable’ to the guests. Their testimonies were damning.”
Anita Singh, The Telegraph

“There are moments that made me feel uneasy. But overall, this is a withering account of how The Jeremy Kyle Show functioned. Hearing insiders talk about how it was made, and what they did, is incredibly powerful.”
Rebecca Nicholson, The Guardian

“From what we saw in this excellent documentary, Kyle was the grubbiest thing on his show. That a show trading in human misery was so popular tells us something about our society. This documentary was a reckoning.”
Carol Midgley, The Times

“I am enjoying The Ipcress File more than I expected. Joe Cole, Tom Hollander and Lucy Boynton are proving a watchable trio as Harry Palmer, Major Dalby and Jean Courtney and I like its droll mode of storytelling. The ultimate test is whether it stands up as a worthwhile piece of entertainment in its own right, regardless of the film or the book. I am increasingly finding the answer is yes.”
Carol Midgley, The Times

“The look of the show as a whole is beautiful, from the stylised opening titles to the shots of London streets. Whoever did the production design deserves a Bafta. Plot-wise, the drama is motoring along nicely, as the search continues for a missing British scientist. I’m glad the show has stuck to Len Deighton’s original creation and not tried to turn Palmer into an action hero.”
Anita Singh, The Telegraph

One And Six Zeros, C4

“After a couple of years of presenting Blockbusters on the Comedy Central channel, Dara O Briain is a practised quiz host, affable and quippy without being cheesy. It was huge fun to watch Steve and Stella from Durham, with their daughter Laura, getting so flustered that they weren’t even sure of their own names.”
Christopher Stevens, Daily Mail