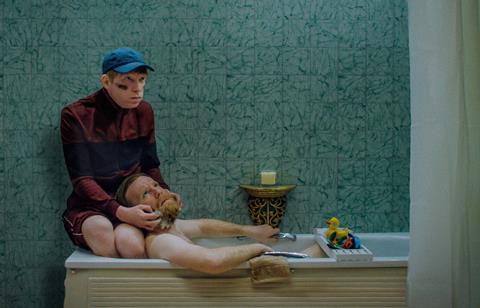 “There are hints of Fleabag and a splash of Catastrophe, but this cerebral, off-the-wall, slapstick comedy is a beast entirely of its own genre. The jokes were incredibly silly but landed every time, thanks to the eccentric script and dedication from the cast. Even when proceedings veered into the existential, Frank of Ireland balanced the amount of weird perfectly.”
Emily Baker, The i

“The chemistry between the brothers warms the experience and gives it a charm it would otherwise struggle to summon. But, overall, the sense is of an opportunity wasted – especially as the series wears on and there is no sign of any change or enlightenment, apart from tiny, insubstantial flashes from poor, downtrodden Doofus.”
Lucy Mangan, The Guardian

“What rescued this first of six episodes was the genuine sweetness between the leads. Brian and Domhnall shared an easy chemistry. They’ve clearly been cracking each other up since childhood and their ease in each other’s company was infectious. Beyond the endless jokes about poo and sex, it was this seam of sibling tenderness that kept it ticking along.”
Ed Power, The Telegraph

“Brian and his brother Domhnall are trying to create a Hollywood-style comedy about two overgrown adolescents — with plenty of immature jokes about sex and embarrassment. All they’ve achieved so far feels like a remake of Dumb And Dumber, starring Mrs Brown’s Boys.”
Christopher Stevens, Daily Mail

“The first episode was, by turns, daft as an eejit, dark enough for comic set pieces around a beloved grandma’s funeral and so casually vulgar that the running gag involved the most obscene lines from Taxi Driver. Stomach all that, and you would probably find this sharp, coarse comedy pretty amusing. The success of much of the rest depended on your willingness to put up with the lowbrow. However, there is real potential in these characters and in the skilfully written situations.”
James Jackson, The Times

“With all the slapstick and Frank’s rampant comedy boners, too much of the humour is a bit on the broad side. Don’t get me wrong, Frank of Ireland is not a crime against humanity on the scale of Mrs Brown’s, but there is a deficit of wit. It’s not terrible but, like so much about our lives at the moment, there’s something missing.”
Sean O’Grady, The Independent

“This new series is worthy-but-dull – and stonkingly chaste despite some steamy casting. There is an attempt to psychoanalyse Leonardo, whose father abandoned him. But this feels like a quick sketch rather than the fuller portrait one of history’s greatest minds surely merits.”
Ed Power, The Telegraph

“It is strangely limited in scope, a straight tale of a brilliant young artist who has a few setbacks along the way, mostly to do with jealous rivals. The drama sometimes feels like the sort of educational film they have on loop at museums, a kind of animated Wikipedia entry, with a script that prefers not to let subtext get in the way of straight facts. You can imagine art history A-Level students being shown it at the end of term while their teacher googles antiques.”
Ahmed Salem, The Independent