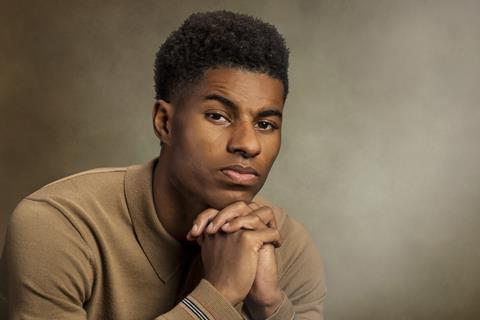 “The documentary didn’t delve too deep, and there was a sense that part of the picture was missing. We were introduced to Rashford’s manager, Kelly Hogarth, vice president of Roc Nation. That is the US talent agency run by billionaire rapper and media mogul Jay-Z, which signed Rashford in April. It would have been interesting to learn more about how this global outfit was helping Rashford’s campaign. At one stage, the footballer - Hogarth by his side - held a meeting with the heads of Britain’s major supermarket chains and Henry Leon, the Government’s food tsar. That would have taken quite some organising, but there was no explanation as to how it came about.”
Anita Singh, Telegraph

“The most moving aspect was this documentary’s focus on the role Rashford’s mother, Mel, played in raising five children alone (we heard little about their father), grafting to feed them, encouraging Rashford’s talent, but telling them never to judge anyone for being poor. “Sometimes we didn’t even have a loaf of bread in the house,” she said. She would lie to the children that she had eaten when she hadn’t. Friends didn’t know her predicament because she was embarrassed. That she did two jobs at Ladbrokes, finishing her shift then buckling down to the cleaning, rather destroyed the “feckless single mother” trope. This woman is a grafter who raised children with great morals. Certain politicians could learn from her.”
Carol Midgley, The Times

“The film was a fascinating study of a man whose single-mindedness has provoked real change, and who has bucked the stereotypes of rich sports stars. Nothing in the footballer’s demeanour spoke of politics, or PR, or an interest in boosting his own image. He doesn’t want children to go hungry. It really is that simple.”
Barbara Speed, The i

“Covid restrictions meant this was filmed as two-hander. Cue endless jokes about the shops running out of “damp moss for the privy”, Will stockpiling food while complaining about other people stockpiling food, and Kate railing against people “who wear a plague beak but around their necks, like that’s enough”. Instead of covidiots, we have “bubonidiots”. It was fertile ground and cleverly done, although the best gag wasn’t Covid-related. Kate noted that James I wanted to bind the separate nations of England and Scotland together in one union. That’ll never work, scoffed Will, “and if it does I’ll give it 400 years, tops”.”
Anita Singh, Telegraph

[Ben] Elton used the plague to satirise public attitudes to Covid-19 and anti-maskers, although they had “plaguey beaks” (a riff that went on a fraction too long). Will was alone in London because “non-essential travel” was banned. Kate banged her pan to thank the corpse collectors while selfish people panic-bought damp moss for the privy. There were a lot of lines to learn here and months of sanctimonious behaviour for Elton to spoof. (“If you walk your dog more than once a day people will DIE!” Will shouted from the window.)
Carol Midgley, The Times

“We’re all aware of the limitations placed on TV productions this year, but a Christmas special should at least have the spirit of a normal episode, and more. This, as a two-hander lacking the usual rollicking ensemble, and based on a single joke, was a less than half-fat version. Stripped back to the basics, it took on rather too much of the boredom and misery of its subject matter.”
Barbara Speed, The i

“This enjoyable 90-minute salute to the man born plain David White (he borrowed his stage name from Jason And The Argonauts) was crammed with well-chosen clips, including a glimpse of him in Crossroads in the mid-1960s and another from a PG Tips ad with him holding a giant teabag. He paid his dues, before he found stardom on Only Fools And Horses. Before that, he was Ronnie Barker’s foil as Granville in Open All Hours, and played a supporting role as the old lag Blanco in Porridge. Sir David reveres Ronnie as his mentor, and it was touching to see them reunited at the Baftas in 2003, when Jason proudly referred to Barker as ‘the Guvnor’.”
Christopher Stevens, Daily Mail