“Amid the dumbed-down TV dystopia of Love Island and The X Factor, it was refreshing to see clever people on screen, being enthusiastic.” 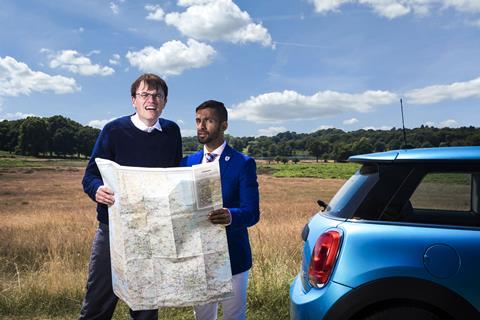 “I’d far rather watch these two traversing Britain than some orange-faced Towie instagrammer, but some of the ‘sights’ they visited would challenge even the most interested mind. I think we could have done without Simon Callow’s booming ‘isn’t this spiffing?’ narration, but it was a pleasant, gentle and very different half-hour.”
Carol Midgley, The Times

“Their brainiac bromance was jaunty and enjoyable to behold. Amid the dumbed-down TV dystopia of Love Island and The X Factor, it was just refreshing to see clever people on screen, being enthusiastic about knowledge.”
Michael Hogan, The Telegraph

“Despite some dubious musical choices (I’m still not sure why the shots of Blackpool Tower were accompanied by jaunty Greek bouzouki music) and a forced voiceover script, Monkman and Seagull’s Genius Guide was an entertaining if undemanding half hour.”
Sarah Hughes, The i

“For a show that has genius in the title, it didn’t impart a great deal of wisdom, and seemed too skittish to stay in one place for long enough to throw out the truly nerdy facts and explanations that this could have taken. I wanted diagrams, re-enactments, something along the lines of Drunk History – with a little bit of brainy swagger. It was all very gentle and amusing, if a little too gentle at times, bordering on slightly slight.”
Rebecca Nicholson, The Guardian

“Writer, director and producer Hugo Blick is a distinctive TV drama auteur who has imbued Black Earth Rising with a kind of woozy beauty. This is shaping up to be a nuanced and ambitious story of race, regret, trauma and the ghosts of the past.”
Michael Hogan, The Telegraph

“Blick continues to thicken the plot nicely but the real star here remains Michaela Coel, whose awkward, honest and brutal eulogy to the woman who was and wasn’t her mother made for uncomfortable, unmissable TV.”
Sarah Hughes, The i

“I felt a bit mean last week giving Strangers two stars and a bit of a kicking, so I returned to give it another shot. My peevishness, I’m afraid, was entirely appropriate. This is shaping up into a right old turkey in which we are presented with a gallery of characters about whom we care not one jot and dialogue that sounded at times as if it had been written by an app.”
Carol Midgley, The Times