Our Girl; The Mandalorian; Malory Towers

”Formulaic, predictable and as authentic as a phishing scam but, for some reason, its fans don’t seem to mind” 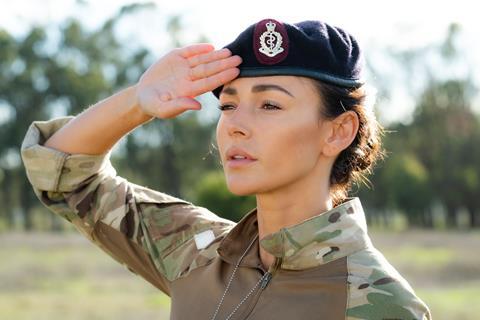 “Writer Tony Grounds clearly has no intention of tinkering with his winning formula. Michelle Keegan, with her gleaming teeth and blow-dried mane, was still surrounded by squaddies who resemble rejects from a reality show boy band. Our Girl is formulaic, predictable and as authentic as a phishing scam but, for some reason, its fans don’t seem to mind.”
Adam Sweeting, The i

“Michelle Keegan is always an engaging, involving presence. Sadly, this episode was let down by a clumsily predictable script. The opening half-hour was lamentably slow as fresh characters were introduced. You could almost hear the narrative cogs clanking around as storylines were set up. Keegan might be bowing out but Our Girl doesn’t need a new star. It needs a new writer.”
Michael Hogan, The Telegraph

“Now she’s back off to Kabul to face her traumas and the show still has a slightly odd tone – a yoofy, romantic army soap but with a fair amount of added The Hurt Locker grittiness.”
James Jackson, The Times

“Our Girl is to be commended as one of the few primetime dramas with working class characters at its heart. None of the families has an open-plan kitchen-diner the size of a five-a-side football pitch in this show, or walk-in wardrobes with floor-to-ceiling shoe racks.”
Christopher Stevens, Daily Mail

“It is cool. The monsters are cool, the spaceships are cool, the robots are cool. The landscapes: whoa. The ideal TV spin-off should bow to the franchise that bore it, then strut off on its own without looking too fretful about whether the die-hards follow. In this case, they surely will: The Mandalorian is too cool to resist.”
Jack Seale, The Guardian

“Show runner Jon Favreau knows a lot about hooking an audience, as the director of the original Iron Man and of Disney’s Lion King remake. He works his magic astutely here. As the audience would demand, winks and callbacks abound.”
Ed Power, The Telegraph

“Disney’s arrival on the streaming scene has been marketed so hard that to praise its signature show is to risk looking like a total sucker. So it is with a slightly heavy heart that I must report that its Star Wars spin-off The Mandalorian is infuriatingly good fun, even with the brazen inclusion of a baby Yoda-like creature to set Disney Store cash-registers ringing till Christmas comes.”
James Jackson, The Times

“Malory Towers is a thoroughly modern take on the classic books, with an impressively diverse cast. It also addresses prominent issues for school children, such as bullying. Still, the creators have not completely removed the Blyton-esque warmth: crisp uniforms, even crisper RP accents and scenes of a steam train rolling through the English countryside.”
Emily Baker, The i