“The story was crowded and occasionally implausible, but the incestuous, dysfunctional nature of politics felt dispiritingly accurate.” 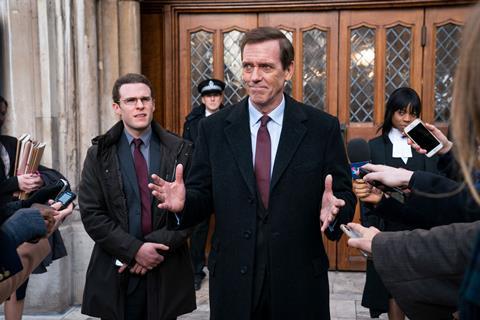 “David Hare here is focused and angry without descending to didacticism or silliness. The story was crowded and occasionally implausible, but the incestuous, dysfunctional nature of politics felt dispiritingly accurate.”
Gabriel Tate, The i

“The fact that it is set in an alternative universe where neither Brexit nor the pandemic dominate each character’s every thought gives this unspooling tale of greed, weakness and corruption a generic or pleasingly retro mood, depending on your take. It is good to be reminded of the enduring truths – that power corrupts, that charisma tells us nothing of a man (or woman), that political ambition is rarely purely a craving to serve the public.”
Lucy Mangan, The Guardian

“With any actor less likeable than Hugh Laurie, this story would be unbearably cynical. Everyone lies, everyone betrays each other. The Westminster plotters are venal, the journalists are cut-throats and the rest are trading secrets like street-corner drug dealers.”
Christopher Stevens, Daily Mail

“I found myself watching the next episode, then the next. Yes, it is too mannered and expositional to be realistic (in this way it reminded me of Bodyguard), but it is welcome immersive escapism and not nearly as earnest and improbable as Hare’s last big TV offering, Collateral. This is a decent, if occasionally daft, distraction.”
Carol Midgley, The Times

“While Coronavirus has obviously brought complications to Strictly 2020 it hasn’t, on the evidence of a reliably glittery launch episode, sapped the heel-clicking juggernaut of any of its strut. How hugely soothing it was to have it back. As the pro dancers opened with a routine soundtracked by the confetti-strewn strains of Rozalla’s Everybody’s Free, it was a pleasure to be ushered once again into this parallel dimension of twirls, tight trousers and toe-tapping thrills.”
Ed Power, The Telegraph