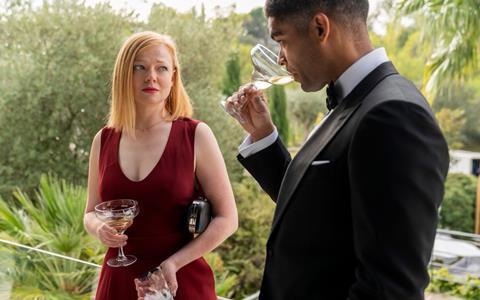 “It’s an ingenious concept, stylishly realised. Performances by an all-star cast – many of whom are Britons doing decent American accents – are strong. Most of the couples depicted have convincing chemistry. Across six bittersweet vignettes, it adds up to a wryly intelligent treatise on the nature of true love and how we find it.”
Michael Hogan, The Telegraph

“Deliver Us is familiar in parts, but the premise is strong, even if we have seen much like it before. The plot is appealingly knotty, with plenty of characters to weave in and out of the story, and it has a decent grasp of small-town dynamics that transcends its setting. A setting that is – naturally, reliably – grim.”
Rebecca Nicholson, The Guardian

“Deliver Us is a new Scandi noir offering and, unusually for me because I do weary of endless gloom and dark silences, I seem to be sold on it. It looks like what we might have here is a sort of Danish Murder on the Orient Express-cum-Death Wish. I hope so. Definitely recommend.”
Carol Midgley, The Times

“It follows in a fine recent tradition of semi-autobiographical, first-person, confessional millennial comedy-dramas. Some of the plotting and characterisation drifts into the pedestrian, falling into plenty of modern sitcom clichés, but the writing is razor sharp.”
Chris Bennion, The Telegraph

“The sharply funny opener made me thank the television gods for delivering it to us. Clever, snappy and with much to say about what flawed, confusing creatures we all are. I can’t wait to watch the rest.”
Gwendolyn Smith, The i

“As she blasted out Don’t Rain On My Parade from Funny Girl, Sheridan Smith was channelling Barbra Streisand. Straight away, I had a lump in my throat. This music is so unashamedly schmaltzy, and we’ve been deprived of it for so long, that it’s impossible to be unaffected.”
Christopher Stevens, Daily Mail

“On one level, it was just a bit of innocuous fun as Lindsay nosed around the frankly terrifying mansion, all leather-lined lifts, gaudy chandeliers and creepy subterranean. But these glitzy distractions failed to mask the fact that there was no juicy intrigue or tension and little real insight into Kam and Anya’s lives. What we were left with was just a shallow veneration of wealth.”
Gwendolyn Smith, The i