The Junk Food Experiment; The Satanic Verses: 30 Years On

“It was overlong, under-thought and taught us little” 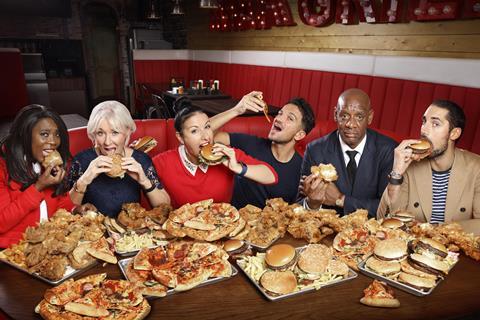 “This was a drawn-out, slightly state-the-obvious documentary in which six alleged celebrities shovelled down nothing but junk food for three weeks, then felt unwell, as if such things need proving. Where the programme did have value was in Dr Michael Mosley showing the serious but often invisible effects.”
Carol Midgley, The Times

“Anyone could predict that three weeks of eating takeaways oozing with fat would make porkers of our celebs. The truly worrying aspect, and this was brought out strongly, was the mental damage this food does. Even Peter Andre, the world’s most tiggerish man, ran out of steam. He looked like a depressed Duracell bunny.”
Christopher Stevens, Daily Mail

“Certainly, it was interesting to discover the ‘unseen’ effects of junk food on sleep, concentration, migraines, stroke risk, addiction, and mental agility that were far scarier than putting on a bit of weight. But there was little insight. Superficial commentary and fun gimmicks kept this experiment light, but if Deliveroo is our death warrant, then surely this is no time for flippancy.”
Sarah Carson, The i

The Satanic Verses: 30 Years On, BBC2

“Presenter Mobeen Azhar’s circular thesis floundered midway through, becoming circular and repetitive, but this fine film reignited in an impassioned closing sequence. The climactic confrontation was a reminder that the spectre of the Rushdie affair and the culture wars it sparked are, sadly, still with us.”
Michael Hogan, The Telegraph

“This is a co-production with Vice Studios and it certainly lacks stuffiness. But, like Stacey Dooley, this means Azhar can get the goods, and he does so again and again. There are a number of gripping interviews, in which difficult questions are posed and people are challenged without any sense of being needlessly inflammatory.”
Rebecca Nicholson, The Guardian

“Azhar’s conclusion to this thoughtful, articulate documentary that it wasn’t just about the book, but a howl of protest against racism, ridicule and the immigrant experience put the furore into context, as did the assertion that it had delivered a ‘mad mullah’ caricature to the tabloid right wing.”
Carol Midgley, The Times

“There was no comment from Rushdie, other than clips pulled from the archive, and no attempt to analyse the damage done by book burnings to Britain’s traditions of free speech. Thirty years ago, the BBC was capable of covering these issues through in-depth Panorama investigations. This was more like a Radio One Newsbeat report.”
Christopher Stevens, Daily Mail

“Mobeen Azhar was a wise choice for the discussion. His age meant that this was no mere retrospective. This was confronting, considered, illuminating TV.”
Sarah Carson, The i