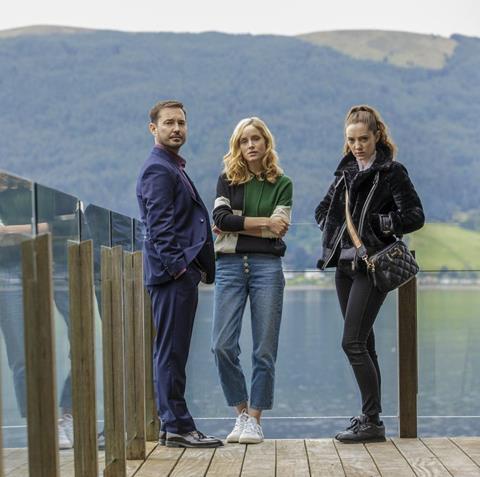 “The Nest does a nice job of thickening the plot with wider questions about the morality of “buying a baby” and exploiting the vulnerabilities of others without letting it hold up the plot or dissipate suspense. Its subtle layering so far puts The Nest a cut above the usual run of such dramas, though I hope the closing shots and the emerging facts about don’t signal a slide into a more by-numbers approach in the coming weeks.”
Lucy Mangan, The Guardian

“So, yeah, I get it: social division, infertility, desperation. This five-part series by Nicole Taylor, who wrote the Bafta-winning Three Girls, was never going to be confused for All Round to Mrs Brown’s. Heavens, though, with the ominous chords of the soundtrack and camerawork that veered between the beauty and the concrete harshness of modern Glasgow, The Nest rarely stopped reminding you of the seriousness of it all. The Nest is so serious that it’s hard to take it seriously.”
Dominic Maxwell, The Times

“It’s an intriguing set-up though, and this is one of those dramas that could go either way - drawing us in with clever plotting or spiralling into ridiculousness. The director appears to be a little too in love with Dan and Emily’s house, at one point conveying their devastation at losing a baby by framing them, in evening dress, against those lovely windows. Let’s hope the drama lives up to the view.”
Anita Singh, The Telegraph

“The only problem with The Nest, BBC1’s latest well-cast, handsomely staged and tautly written prime-time drama, is its implausible central premise; a well-heeled couple desperate to have a child entrust the surrogacy to a chance-encounter stranger who is clearly not all she seems. The fact that the first episode was so gripping despite the implausibilities is a tribute to Nicole Taylor.”
Jeff Robson, The i

“As so often with Fellowes, anything accidentally left to the imagination was hastily handed to the Greek chorus of servants so they could explain it to us. It was, however, good fun. Which also made it, in a time of disaster, deeply useful.”
Dominic Maxwell, The Times

“There are few things in television so delicious as a face-off between two warring women. The mistake of the series is to include the downstairs staff. They are chippy and unlikeable, and presumably included as a sop to Downton fans. All they do is give you a pang of longing for Carson the butler.”
Anita Singh, The Telegraph

“The drama has been slow to build and overstuffed with characters. Belgravia is a blockbuster novel adapted for the screen by its own author, who lacks the ruthlessness to pare back the plot for TV. But the central theme is emerging now and promises to build to a battle royale for Charles’s affections between two formidable ladies. It’s a clever reversal of the usual bustles-and-bonnets tale.”
Christopher Stevens, Daily Mail

“It’s Lethal Weapon, Innit – or Bad Bruvs, if you prefer. But it makes no secret of its influences or its desire to provide an adrenaline rush. The chemistry between the leads – Noel Clarke as Bishop, the gung-ho maverick from the wrong side of the tracks, and Ashley Walters as Pike, the chilled family man from a dynasty of London coppers – is as strong as ever.”
Jeff Robson, The i