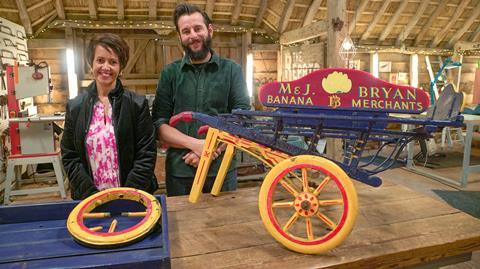 “I am not sure there is a more lovely show on television than The Repair Shop. It is so good-natured and pure, so wholesome and nice, that at times it seems too good for this cold and cynical world. This whole concept is remarkable, really. No wonder it is a hit. For those of us who took up a hobby during any unexpected downtime, this is an inspiration.”
Rebecca Nicholson, The Guardian

“Tears on television are often arrived at dishonestly. But there was no manipulative tugging at the heartstrings or pre-cooked sob stories here. Instead, The Repair Shop spoke to the universal truth that objects are not just objects when they connect us to loved ones. For throwaway telly on a Wednesday night, it was hugely moving.”
Ed Power, The i

“In the end, there’s no getting away from the fact that you are mainly watching experts fixing things while explaining what they’re doing. So unless you like tinkering and watching paint dry you were probably not in the right place.”
Shane Watson, Daily Mail

“Life Cinematic with Sofia Coppola sometimes had the earnest, intense feel of a film studies lecture, but Coppola has one of those quiet but authoritative voices that you just listen to. The presenter Edith Bowman was thorough and precise, sitting at a large table that was also a TV screen, while Coppola, 4,000 miles away in New York, explained her film moment choices.”
Carol Midgley, The Times

“Presenter Edith Bowman was in London, while Coppola was beamed in from New York, and they struggled to make a connection. Perhaps it would have worked with a more forthcoming guest. The shortcomings were not the fault of Bowman, who was an enthusiastic and well-prepared host, but of Coppola. She was polite but seemed shy, which is the kiss of death for this sort of programme. Clips shows, though, are pretty pandemic-proof – we can all sit back and enjoy the content. And what saved this episode was Coppola’s impeccable choice of films.”
Anita Singh, The Telegraph

“Experts explaining their craft can be boring, especially if they are film directors, and even if that film director is the Oscar-winner behind hits including Lost In Translation and The Bling Ring. Fortunately, the idea behind Sofia Coppola: Life Cinematic was simply that she shared the scenes she loves from the films that have inspired her, with presenter Edith Bowman. There were some technical insights (rain always adds drama) but it was essentially a cinematic version of the long-running Radio 4 programme Desert Island Discs.”
Shane Watson, Daily Mail

“The programme doesn’t really sell itself on the wonders of Kent but on the charm of O’Grady. Drily funny, self-deprecating and utterly natural in front of the camera, he treats the viewer like an old friend. But the programme is so brief that we learned little about anything.”
Anita Singh, The Telegraph

“Now that we’re all stuck at home, it made absolute sense to buckle up with O’Grady as he embarked on a rambling yet heartwarming journey of discovery in his adopted county of Kent. O’Grady was beguiling company in this third of six episodes. He radiated puppyish eagerness as he pottered through the episode. Great British Escape proved the ideal delivery mechanism for his laid-back outlook.”
Ed Power, The i