Watchmen; Long Lost Family Special; The Prince and the Paedophile

“Even if comics and superheroes are not your thing, the sheer originality and oddness will carry you along” 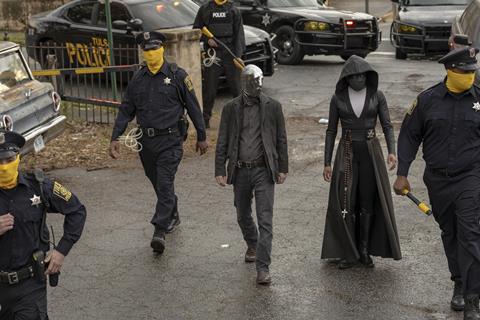 “I’ve no idea if comic book fans approve of Watchmen. However, I enjoyed it enormously. The actions scenes thrilled, the rest intrigued and killing off a major character straight away was a bold way to grab attention.”
Michael Hogan, The Telegraph

“If you have ever spent a weirder TV hour than the one with Watchmen then I’d be interested to hear what it was. Damon Lindelof’s drama was extravagantly, surreally bizarre to the extent that it had Jeremy Irons in a baronial castle writing a play in the nude while a housemaid crouched massaging his thighs. Even if comics and superheroes are not your thing (mine neither) the sheer originality and oddness will carry you along.”
Carol Midgley, The Times

“It has a (still unusually) diverse cast, writing team and cohort of directors in terms of both sex and class, and, even as it strays from Moore and Gibbons’ original content, it honours their underlying ambition: to deconstruct our legends and our myths, ask where they come from, what purpose they serve; and to make us think and think again about who tells us what, why – and why they are the ones who get to do so.”
Lucy Mangan, The Guardian

“This one-off edition of the history show that combines paper trails and archival research with deeply emotional stories took a new path, joining the ‘war detectives’ of the Ministry of Defence’s Joint Casualty And Compassionate Centre. It’s comforting to know that those soldiers who a century ago gave up everything are still honoured and remembered.”
Christopher Stevens, Daily Mail

“This special of Long Lost Family worked because it didn’t feel invasive or purposefully tear-jerking – it was simply a privilege that these brilliant women allowed ITV’s cameras to follow their efforts in affording these fallen soldiers a named grave, a family and most importantly, a story.”
Emily Baker, The i

The Prince and the Paedophile, Channel 4

“As the report detailed Epstein’s crimes and connections to the Duke of York, it made uncomfortable viewing – albeit not half as uncomfortable as it would have been at Buckingham Palace. Material here wasn’t fresh. However, the documentary was forensically made and raised more questions about Epstein’s queasy activities.”
Michael Hogan, The Telegraph