“Thoughtful, thrilling, life-affirming and emotionally devastating, this was TV for both heart and mind.” 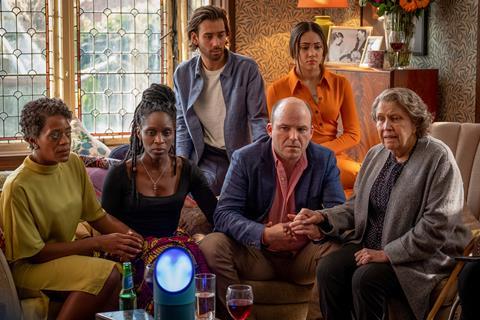 “Everyone involved should be saluted for bringing something so challenging to terrestrial prime time. Thoughtful, thrilling, life-affirming and emotionally devastating, this was TV for both heart and mind.”
Michael Hogan, The Telegraph

“Was all this brilliant or bananas? Hard to say, and I think that’s because it was a bit of both. If only Davies weren’t quite so tell-not-show about everything, if there were less of that apocalyptic choir during the dramatic climaxes, I’d have found it that much more profound and moving.”
James Jackson, The Times

“It wasn’t the most subtle work and it wasn’t aiming to be. What it was was an unwholesome amount of fun-slash-devastation; soap-operatic in the best way, with character never sacrificed to plot, but plot there being aplenty. Queer as Folk may remain Davies’ masterpiece, but this was a glorious – prescient, funny, warm, frightening, compelling – companion piece.”
Lucy Mangan, The Guardian

“Disappointingly, this regressed into an implausible mixture of we-can-save-the-world melodrama and clunking great chunks of exposition. It felt like one of his old Doctor Who scripts rescued from the shredder.”
Adam Sweeting, The i

“If last night’s abrupt ending was just a cynical stunt for a cliffhanger, that’s a stupid, cheap cop-out. To make it all the more unforgivable, this had been a cracking return for the show — full of emotional turmoil as Missy tried to help her friend prepare for her interview at Oxford University while dreading what her own life will become when school ends.”
Christopher Stevens, Daily Mail