Wanderlust; We Are British Jews; The Truth About the Harry Quebert Affair

“Wanderlust— like Lady Chatterley’s Lover, Tipping the Velvet, Versailles etc before it — only proves the rule that by the time the sordid smut arrives it is as anticlimactic as a naughty weekend in Blackpool.” 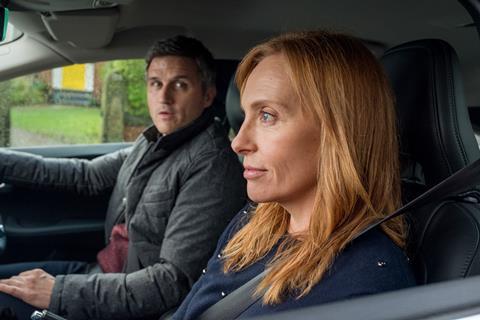 “When not one but two middle-aged characters were caught taking advantage of themselves, you could be forgiven for thinking this was a script bent on pleasuring itself. But no, this is a bracingly frank sex comedy which dares to confront the lean marital years when the pilot light has gone out in the bedroom and even the raunchiest role play won’t stoke the boiler.”
Jasper Rees, The Telegraph

“It has been a bit of an effort getting to the end of the first episode; that might have something to do with turning a 90-minute play into six hours of television. Also … perhaps … all the pausing … in the delivery … of the dialogue. Is that about sounding authentic, like actual, real dialogue? Maybe, but I also find it a teeny bit annoying – affected and theatrical.”
Sam Wollaston, The Guardian

“Wanderlust— like Lady Chatterley’s Lover, Tipping the Velvet, Versailles etc before it — only proves the rule that by the time the sordid smut arrives it is as anticlimactic as a naughty weekend in Blackpool. At least this time, the show in question might actually raise a few eyebrows, less for the fully clothed sex scenes — hardly Blue is the Warmest Colour — but in providing some frank talk about our real feelings towards sex.”
James Jackson, The Times

“By the time the credits rolled, I actually began to wonder if I’d turned into a terrible prude. It’s aimed, I think, at people who feel we need a serious debate about the role of lifelong monogamy in modern-day society and at those who believe the whole issue of sex in middle age needs bringing into the open in a provocative piece of contemporary television drama. Personally, I’d rather watch Doc Martin.”
Mike Ward, Daily Express

We Are British Jews, BBC1

“The first episode did a good job of representing both deeply assimilated members of the community like me and more ‘Jewish’ Jews, who embrace their ethnic differences and feel a deep connection to Israel. Lilly and the other members of the group all expressed their views intelligently and with respect for those who disagreed with them, something that hardly ever happens when it comes to this sensitive subject.”
Paul Kendall, The Telegraph

The Truth About the Harry Quebert Affair, Sky Witness

“Sky’s new American mystery The Truth About the Harry Quebert Affair felt like the glossy equivalent of a doorstopper novel you buy in an airport and tear through on a long-haul flight.”
James Jackson, The Times