“The most warped thing on telly.” Read on for the verdict on last night’s TV. 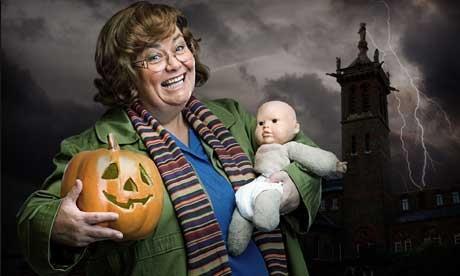 “Blackly hilarious at one moment, and genuinely unsettling the next…Lovely meaning “good to look at”, incidentally, as well as delicious, since it’s always been one of the virtues of Psychoville that they really get the aesthetics of horror just right…It was a very classy kind of trash.”
Tom Sutcliffe, The Independent

“A horribly funny Hallowe’en special…you could say yesterday’s blast was merely the lead lid on the coffin of the original story arc. Yet it had a completist feel…Psychoville is the most warped thing on telly.”
Andrew Billen, The Times

“It’s a kind of grown-up version of Conn Iggulden’s bestselling Dangerous Book for Boys – though obviously the phrase “grown-up” only has limited application here…I should really hate it. But I just couldn’t. They’re having so much fun it seems churlish not to smile.”
Tom Sutcliffe, The Independent

“A certain kind of man will love this show – the unreconstructed oaf who never really grew up, possibly still has a train set, spends time in his shed, and doesn’t care much for olives or shaved parmesan. Top Gear man, in other words…[it] will preach to the converted. A good idea…but misguided in the execution.”
Sam Wollaston, The Guardian

“That any of this is essentially man’s work is nonsense, yet this episode could be screened as an example of a well-made factual entertainment.”
Andrew Billen, The Times

“Only this pair [of generals]…looks worth keeping. With 23 writers involved, the hit rate could be higher.”
Andrew Billen, The Times

“For the most part however the voiceover just reeled off the standard GCSE version of events, useful perhaps for those taking exams next summer but for the rest of us rather humdrum compared to the drama on the screen.”
Matt Bayliss, Daily Express