“Its resonance comes from its gutsy understatedness.” Read on for the verdict on last night’s TV. 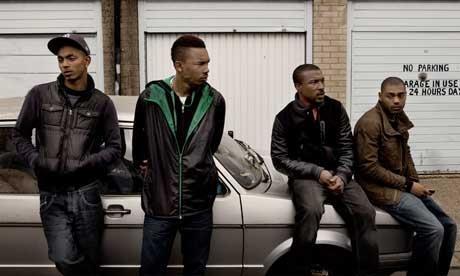 “While it’s hard to imagine the never-ending cycle of drug dealing, shootings and stabbings failing to attract a single siren in real life, Bennett’s vision somehow worked. Top Boy isn’t a story of goodies versus baddies, it’s a story of baddies versus baddies; the real enemies are the members of other gangs.”
John Crace, The Guardian

“Its resonance comes from its gutsy understatedness. The tension in The Wire was partly the chase; the cat–and-mouse between dealers and the police. Top boy - so far – lets people merely exist; lets normal existences roll on in an estate where drugs are such a life force that they’re simply called “food”.
Alex Hardy, The Times

“”I was born and bred in Summerhouse. I’m 26 years old… I’ve got nothing else to be except this”, says Dushane, when he’s pitching for promotion to the area’s criminal boss. It’s a line that juts a little proud of the drama’s surface. Does Bennett mean us to take it as evidence of Dushane’s falsely narrowed horizons or is he putting a liberal plea of mitigation in his character’s mouth?”
Tom Sutcliffe, The Independent

Attack of the Trip Advisors, Channel 4

“This thoroughly entertaining documentary was meant to be an exposé of the negative effect that bad reviews are having on some businesses, but it was impossible to watch it as anything other than a freak show.”
John Crace, The Guardian

“Channel 4 sent a bunch of prolific Trip Advisor reviewers to meet some disgruntled hoteliers and restaurateurs. Your final verdict on these encounters will depend on these encounters will depend on how much time you spend on Facebook boring everyone with the minutiae of your daily existence but it did seem as if the Trip Advisor lot came off looking rather silly.”
Matt Baylis, The Express