“It took over eight minutes to raise the first smile.” Read on for the verdict on last night’s TV. 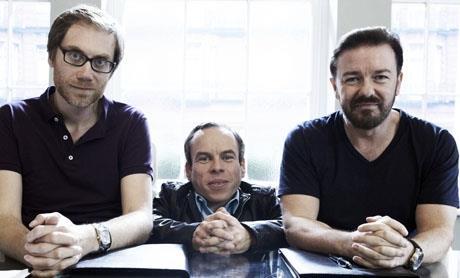 “The problem with this new series is not that it’s offensive; it’s that it’s just not very funny. It took over eight minutes to raise the first smile.”
John Crace, The Guardian

“You saw it again and again, in the unmistakably Brentish way that Warwick added self-serving footnotes to embarrassing footage; in the little sideways glances at the camera; in the unwitting revelations of his self-centredness. None of those jokes would be substantially different if [Warwick] Davis was two feet taller.”
Tom Sutcliffe, The Independent

“It is, of course, a good role and, fortunately too, [Ricky] Gervais and [Stephen] Merchant still have an acute sense of the ridiculous.”
Andrew Billen, The Times

“Rev is one of those rare beasts – a sit-com that actually gets funnier the better you know the characters. The first series took a bit of time to bed in, but the second hit the ground running.”
John Crace, The Guardian

“What makes the comedy work or ensures that it isn’t just a bunch of jokes about communion wine and dog collars is the core of truth running through it.”
Matt Baylis, Daily Express

“The show is better (and more lovable) when it seems to celebrate human weakness. But then it’s lovable enough itself to be forgiven the odd shortcoming.”
Tom Sutcliffe, The Independent

“Now here was a celebrity cameo, and an allegory, to cherish. Ralph Fiennes, bearded, benign, grave, was not playing the bish at all. He was, unexpectedly, God.”Andrew Billen, The Times

“Improbable? Who cares? It’s fun to be fooled for an hour.”
Matt Baylis, Daily Express