“Hugh’s fight against waste had our attention.” Read on for the verdict on last night’s TV. 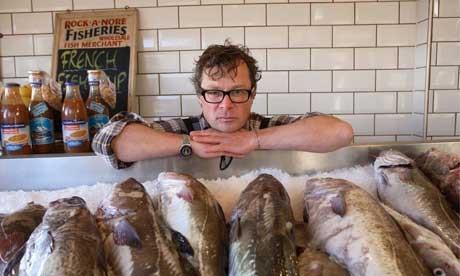 “On a North Sea trawler, Fearnley-Whittingstall collected what would normally have gone over the side for the gulls – thousands of pounds’ worth of cod and coley.”
Tom Sutcliffe, The Independent

“As the silvery streams continued their relentless flow, Hugh’s fight against waste had our attention. Unfortunately, things sagged a little thereafter as he failed to explain fully the alternative options, at least to total CFP (Common Fisheries Policy) ignoramuses like me.”
Lucy Mangan, The Guardian

“The likelihood of this changing minds in Brussels is, of course, about as high as getting Brits to order mackerel baps rather than cod at their local chippies, which was Hugh’s other wheeze.”
Andrew Billen, The Times

“Squirm-inducing throughout, the show reached its low point when the parents crept into their children’s hotel rooms at one point to ferret through their belongings in search of evidence.”
Tom Sutcliffe, The Independent

“The pair were ostensibly investigating a nail gun murder that rhymed with the execution of a young, drug dealing Glaswegian doctor, but that was a likely story.”
Andrew Billen, The Times

“Taggart unlike most fine wines, never seems to go past its drink-by date. It just keeps on improving, infinitely.”
Matt Baylis, The Express

“I could have cheerfully dumped the whole thing in a basket marked discard and sent it over the side, myself.”
Lucy Mangan, The Guardian

“Even among the brain-straining forensics and the slick graphics there’s room for a little dark humour.”
Matt Baylis, The Express