“I wasn’t shocked or very amused.” Read on for the verdict on last night’s TV 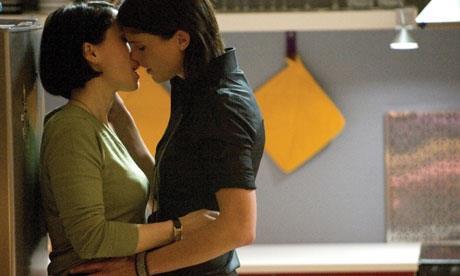 “The BBC’s answer to America’s The L Word began last night, and 85% of its dramatis personae were lesbian. The funny thing is, Lip Service is actually not that bad. It’s got brio. I’ll push my neck out here and say Fiona Button, who plays Tess, may be the next Billie Piper.”
Andrew Billen, The Times

“Set in Glasgow, this opening episode introduced us to a cast of twentysomething women reconciling themselves to the difficulties of modern life. That this hour of spirit-crippingly tedious drama should be topped and tailed with two sex scenes, in which various nubile young women pleasure each other, gives you some indication of its banality.”
Amol Bajan, The Independent

“Glasgow looks good, glamorous even. The cast certainly looks glamorous. But there the fizz rather fizzles out. The dialogue doesn’t sparkle, there’s none of the confidence of Sex and the City or The L Word. Sometimes it tries to be risque (a sex scene in the presence of a corpse), at other times funny (hiding under an ex’s bed with you-know-what going on up above). But it succeeds at neither – I wasn’t shocked or very amused.”
Sam Wollaston, The Guardian

Tom Daley: the Diver and his Dad, BBC1

“The documentary recorded a year in the life of an ordinary family under extraordinary pressure. Tom was defending his various diving titles while taking his GCSE’s. Rob was under even more grueling examination for a brain tumour. Yet Tom emerged as a 16 year old blessed not only with talent and good looks but the nicest temperament you could imagine. The same applied to his besotted, dedicated Father.”
Andrew Billen, The Times

“For capturing the completeness of character, Tom Daley: the Diver and his Dad deserves top marks. I don’t think I’ve ever seen a father’s love for his son presented more charmingly on the small screen.”
Amol Bajan, The Independent

“Tom seems lovely, a bit grumpy in the mornings as most 16-year-olds are, but otherwise a very likeable young man – polite, hard-working, dedicated, grounded. But Tom is only 16 and, like most 16-year-olds, doesn’t have an awful lot to say. It all falls a bit flat to be honest. Which I believe in diving is called a belly flop.”
Sam Wollaston, The Guardian

“Whites is one of those modern comedies where audiences do far less laughing than cringeing. Last night’s slice of action involved a sperm sample, a pair of leather driving gloves and a woman with one arm. You don’t need to know how these elements joined up to know that this show is four-star tasteless.”
Matt Baylis, The Daily Express