“I was sympathetic, without being surprised by the treatment dished out.” Read on for the verdict on last night’s TV. 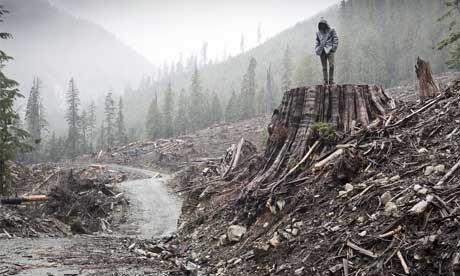 Storyville: If A Tree Falls, BBC4

“In the States they’ve taken tree hugging to tan extreme that in the eyes of the government borders on terrorism..As a British viewer with only a passing acquaintance with society across the pond, I was sympathetic, without being surprised by the treatment dished out to Daniel.”
Matt Baylis, The Express

“The film gave time to those who saw their buildings burned by Dan and his the ELF cohorts but it was hard – especially in the face of McGowan’s deeply held beliefs, articulate denunciation of the huge companies who destroy so much without compunction or effective condemnation and his family’s calm courage as he faced his sentence – to feel that even massive property damage should fall under laws intended to punish those responsible for the deaths of innocent people.”
Lucy Mangan, The Guardian

“I haven’t quite made my mind up about it, but I’m not sure it’s made up its mind about itself. I’m not sure how comfortable it is with its own premise -  the Chandler and co solve the crimes of the present with the help of crimes from the past, as advised by Ripperologist Ed Buchanan.”
Alex Hardy, The Times

“Louise Osmond’s film had one significant difference from a standard cable-channel penny dreadful. It concentrated for its interviews not on investigators or researchers but on the victims’ relatives and friends. And its subject was less the process of the police enquiry (which has got nowhere, after all) than on how these women were missed – the unanswered phone calls and growing silence that led those who cared about them to call the police.”
Tom Sutcliffe, The Independent

“It has been an excellent series, detailing the (literally) thankless task of preventing inadequate and damaged people from passing their damage on.”
Tom Sutcliffe, The Independent

“All in all it was a mass of murky waters and opaque systems, infused with a sense of money calling to money, those on top taking care of their own and the plebs somehow left scrabbling for scraps of a meal for which they had already paid more than £9bn. Ah, the commercial Corinthian spirit. Fatter, richer, shittier. Roll on July.”
Lucy Mangan, The Guardian