“Greece currently only means one thing to most British viewers, and it isn’t taramasalata and souvlaki.” Read on for the verdict on last night’s TV. 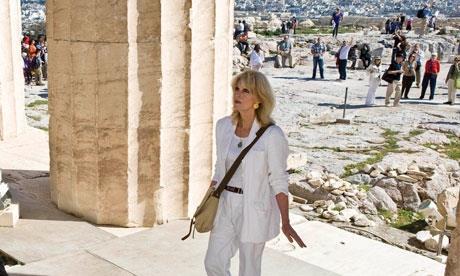 “If there was a problem with the programme, it’s that Greece currently only means one thing to most British viewers, and it isn’t taramasalata and souvlaki but sovereign debt. Lumley did occasionally refer to hard times, but mostly the catastrophic state of the country’s finances didn’t get a mention, except from the sardonic running commentary in your head.”
Tom Sutcliffe, The Independent

“Of course, this programme wasn’t filmed yesterday. Maybe when they made it, the country wasn’t sitting on the brink of ruin. But it would have been pretty near the brink..The rest of the world will be saying there’s a real story in this country.”
Zoe Williams, The Guardian

“You never know quite what’s going on in this murky thriller but then again thats a lot more fun than knowing exactly what is going on.”
Matt Baylis, Daily Express

“It too repeatedly asks us to recall previously assigned details…and also keeps us waiting…It is a stropng idea but one best played for its black humour. Unfortunately Hidden is almost solemn in its pretensions to seriousness.”
Andrew Billen The Times

“As I watch this series i find myself continually wondering if C4 has unearthed a truly exceptional school or of there are actually teachers of this quality beavering away all over the country.”
Matt Baylis, Daily Express

“[It] is now so touching that it leaves you hypersensitised for hours afterwards, so that if somebody sneezed or said a nice thing, you’d immediately start crying.”
Zoe Williams, The Guardian

“The series continues to be funny, moving, depressing and uplifting by turns.”
Tom Sutcliffe, The Independent

“Each week it reminds us of what we ask of teenagers: to apss exams just when growing up is a full time job.”
Andrew Billen, The Times