“It’s still a lot more real than most so-called reality television. More moving, too, and more important.” Read on for the verdict on last night’s TV. 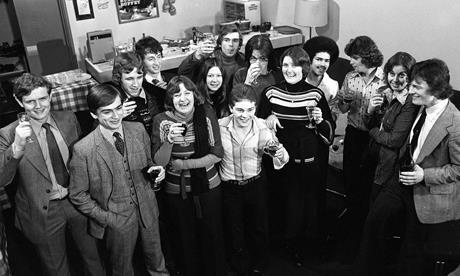 “If you didn’t shed at least one or two tears during it then you might want to check your pulse. It is, by some stretch, among the most affecting television programmes ever made, even when – as with last night’s opening episode – it begins in determinedly upbeat style.”
Tom Sutcliffe, The Independent

“These are snapshots. But it’s still a lot more real than most so-called reality television. More moving, too, and more important. It’s a massive show about people and life, and there’s not much as important as that.”
Sam Wollaston, The Guardian

“It was interesting to see the extent to which the Seven Up! Lot had become “telly subjects” as well as “real people”, which is what Apted intended in 1964 when he started following them every seven years.”
Alex Hardy, The Times

“This was all shocking stuff, although needless to say the information dug up on the three subjects was tame stuff, the point being just how easy it was to get hold of it. but why was it necessary to feature one of the volunteers weeping at the end?”
Matt Baylis, The Express

“They were doing the spring cleaning in the first of a new series about the Duke of Devonshire’s little place in the country. They have some help, including 20 cleaners, a clutch of textile specialists and 21 gardeners. But then, since members of the public tramp through their house for over half the year, they need it.”Tom Sutcliffe, The Independent

“A fly-on-a-magnificent-painted-wall documentary about the elegant Derbyshire stately, filmed over six months. Not quite 56 Up in scale, but nevertheless ambitious.”
Sam Wollaston, The Guardian

“In cheese we trust, then, was one of the many offbeat messages that this sweet series promises to deliver.”
Alex Hardy, The Times