“An even more irritable and socially spiky Larry.” Read on for the verdict on last night’s TV. 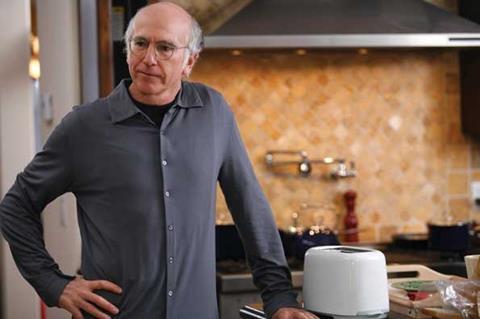 “A cushion was useful in shielding your eyes from Larry’s most mortifying offences… We have much to be thankful for in Curb’s return.”
Tim Teeman, The Times

“We saw an even more irritable and socially spiky Larry (who knew that were possible?) and the sowing of the seeds for his reunion with Cheryl and, by extension, his old Seinfeld crew.”
Alice Jones, The Independent

“This first episode was directed by the maker of Sideways, Alexander Payne, a champion of the hangdog, who brought a lovely sense of place and muted surrealism to events, somehow combining the apocalyptic with the mundane in the stunning fire scenes. Worth hanging around for for at least another couple of weeks, I’d say.”
Alice Jones, The Independent

“Another scabrous invitation to observe the faultlines of Middle America… Exquisitely fast, funny and sharp.”
Tim Teeman, The Times

“Shot on frantic single camera, interspersed with talking heads on the family sofa, it ran as a series of vignettes whose punchlines were often not quite strong enough. Still, as with any sketch show, there were some hits among misses, not least a neat revelation of the links between the characters.”
Alice Jones, The Independent

“Sue Bourne’s witty and moving journey around a clutch of Red Lion pubs to reveal a landscape of loneliness, sociability, sadness, determination and the many ties that bond.”
Tim Teeman, The Times

“Ten Red Lions and quite a few pints – this was a lovely portrait of a British institution.”
Sam Wollaston, The Guardian