“Because good new writers have no choice but to write for established series, the odd ray of light shines through.” Read on for the verdict on last night’s TV. 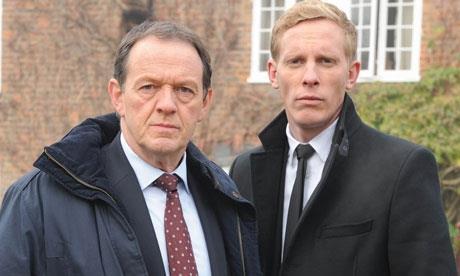 “It’s always felt rather lazy, has Lewis, a rather cynical cash-in on the Morse phenomenon with the right look but none of the soul. Somehow though, because good new writers have no choice but to write for established series, the odd ray of light shines through.”

“Every Lewis there ever was has taken us down the rabbit hole into a fantasy of Oxford, policing and murder, and the suspension of disbelief is hardly helped by constant references to a great work of nonsense literature.”

“The chubby guinea pigs have their houses fitted with cameras to record every surreptitious nibble. Unbeknown to them, they are also tracked when they’re out of the house by two private detectives who take long-lens photographs of them sneaking in a quick prawn sandwich here and there. After a while, the evidence is amassed in what Anna Richardson grandly calls the Incident Room, stained takeaway boxes tagged as Exhibit F and a congealing smorgasbord of everything they’ve eaten and drunk over the preceding days. The guinea pigs swing round and make OMG faces at the scale of their invisible consumption.”
Tom Sutcliffe, The Independent

“Karmic balance to the television schedules must be restored and Channel 4 stepped unhesitatingly into the breach with the festival of stupidity that was Secret Eaters. It was the first episode of a new series that tries to unravel to a different set of fat people each week the hitherto unknowable mystery of why they are fat.”Lucy Mangan, The Guardian

“It turned out to be a delight – a gratifyingly untidy mixture of cultural history, touching personal memoir and offbeat travelogue. And Kendal really did have qualifications beyond her celebrity for that above-the-title billing.”
Tom Sutcliffe, The Independent

“For once, the celebrity presenter – without which under modern commissioning rules a programme cannot be greenlit – seemed sensible, even occasionally helpful and illuminating, rather than madly grafted on 20 minutes before delivery deadline.”
Lucy Mangan, The Guardian

“It is a miracle of form and content. The latter comes from King’s College Hospital in London. Each episode looks at a selection of patients dealt with by the accident and emergency department staff in a single 24-hour period. The form is exquisite.”
Lucy Mangan, The Guardian