“We can never know how the original people felt about it.” Read on for the verdict on last night’s TV. 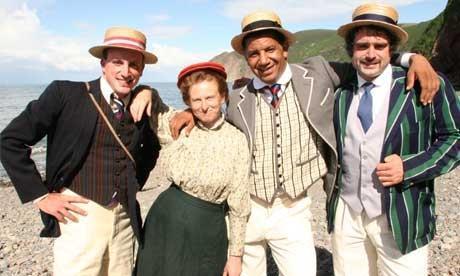 “The Edwardian Farm, however, plays things straight. You get the impression that Peter, Alex and Ruth would go back in time and live like this if they could, and that they are essentially in training for the day when time travel is invented. If it is no less daft for their earnestness, it is a great deal more enjoyable because of it.”
Tim Dowling, The Guardian

“I’m not entirely convinced that Alex is one of nature’s poultry men, after the sequence that showed him ushering one of his hens into a reclaimed chicken shed with the encouraging words, “In you go, boy”, but they ended up with a lot of eggs anyway, and celebrated by boiling up the cockerel for a Halloween party.”
Tom Sutcliffe, The Independent

“We can describe how people in the past lived. We can, thanks to the rich resources of the BBC wardrobe and props department, even show modern people living that way for a TV programme. However, we can never know how the original people felt about it.”
Matt Baylis, The Express

“Presenter Richard Miles sometimes looks like a character played by Robert Webb, of Mitchell and Webb: a historian whose grimly portentous manner is about to be undermined by a demeaning accident. But he has a nice way of putting things, and he’s good at creating suspense, although his success probably depends on your relative knowledge or ignorance of ancient history.”
Tim Dowling, The Guardian

“Lord Sugar has had to put up with him [Stuart Baggs] for six long weeks, which may have been why he made him a project manager for last night’s episode. He doesn’t have any means of guaranteeing that someone ends up in the boardroom, after all, but he can at least shorten the odds a bit.”
Tom Sutcliffe, The Independent

“The issue, I suppose, is whether it is the right content. Having been told by the weather girl of flooding in St Austell, would it not have been nice to see some of it? Or would that have been to dampen the upbeat royalist mood to which even Chiles offered no resistance?”
Andrew Billen, The Times

“I might stay up all night for a glimpse of Johnny Kingdom. He’s a remarkable, feather-hatted presence, clad in mismatching and extremely conspicuous camouflage with an accent that seems to migrate between Devon and Belfast in every sentence.”
Matt Baylis, The Express