“You seemed to be looking down the wrong end of a telescope at something long ago and far away.” Read on for the verdict on last night’s TV. 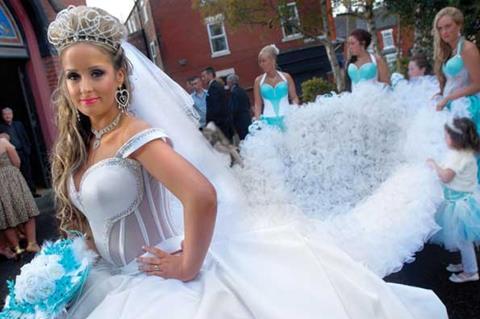 “All this is untouched territory, and touching too. You seemed to be looking down the wrong end of a telescope at something long ago and far away.”
Nancy Banks-Smith, The Guardian

“It was the technicalities of the nuptials themselves that were all so fascinating… This was a stunning documentary into a way of life that is almost totally unknown to outsiders.”
Virginia Blackburn, Daily Express

“Seemed to have left its notebook of questions in the vestry… Cutting Edge didn’t ascertain how the events were paid for, given that travellers don’t earn much… A documentary-maker should dig just as they could and should have asked why girls are being engaged (at 14) and married off so young.”
Tim Teeman, The Times

“How long Travellers can retain their peculiar identity will depend, very much, on how willing the younger generation are to go along with tradition. Judging from last night’s displays of nuptial grandeur, it would seem they are more than prepared to do so.”
Alice-Azania Jarvis, The Independent

“It was an EastEnders double: a ding-dong in a graveyard, then a punch-up in a pub.”
Nancy Banks-Smith, The Guardian

“There has been much chat about the demise of the ‘water cooler moment’, when colleagues gather in the office to discuss the previous night’s telly. I’m not so sure it has died out. There will be a fair bit of chat about EastEnders come Monday – and possibly another 25 years to run.”
Virginia Blackburn, Daily Express

“It seems a bit late to call on the angels. But they were there last night, apparently warbling the EastEnders theme tune… It may be celebrating its 25th birthday, but the angels have long departed Albert Square.”
Tim Teeman, The Times

The Great Offices of State, BBC4

“Palace of Dreams, as this episode was subtitled, was an elegiac account of greatness going off… Don’t miss this little beauty.”
Nancy Banks-Smith, The Guardian

“A behind-the-scenes look at the mechanics of that grand temple of the Civil Service, the Foreign Office, and a very well-done one at that… with an impressive selection of interviewees.”
Alice Azania-Jarvis, The Independent