“A history of state-propaganda, with a historian’s over-reliance on written sources.” Read on for the verdict on last night’s TV. 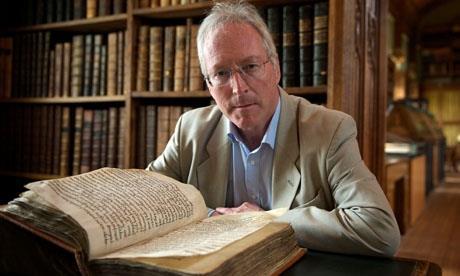 How God Made the English, BBC2

“Crudely put, MacCulloch’s thesis was this – that a sense of English identity (yes, English not British, they came later) had been calculatedly modelled on the chosen people of the Old Testament.”
Tom Sutcliffe, The Independent

“What MacCulloch was really presenting was a history of state-propaganda, with a historian’s over-reliance on written sources.”
Andrew Billen, The Times

“There’s a clue to his thinking in the title of this three-part series, the point being that God did not necessarily choose the English but we undoubtedly chose Him, a tradition beginning with the Venerable Bede.”
Matt Baylis, The Express

The Falklands’ Most Daring Raid, C4

“It was a very Boy’s Own account of the extraordinary plan to bomb Port Stanley airport using Vulcan bombers that were just months away from being mothballed. And it was ripping, frankly, full of stiff upper lip, British understatement and a quixotic indifference to very difficult odds.”
Tom Sutcliffe, The Independent

“It wasn’t that kind of film; it was more of a 30th birthday flagwaving celebration (prepare for lots more yomping this week). And it is a terrific story – a Boy’s Own tale of brave chaps raising their game in a time of need, flying further than any bombing raid had ever flown before, and then flying home again, with the theme from Chariots of Fire playing in the cockpit.”
Sam Wollaston, The Guardian

“In a magnificent and disturbing portrait of the novelist, done in the strand’s usual semi-dreamlike style, it emerged that from the day as a child he hallucinated seeing a stag in Sevenoaks, Golding had always had the greatest difficulty separating myth from reality.”
Andrew Billen, The Times

“Just when I thought it was going through a bit of a lull, along comes this storming episode with everything cranked back up to 11 again – the tension (especially between Brody and Mike), the threat to US security, the drama.”
Sam Wollaston, The Guardian