“It is moreish partly for the obvious reason that Fellowes is deft at keeping a large number of characters and plots in play.” Read on for the verdict on last night’s TV. 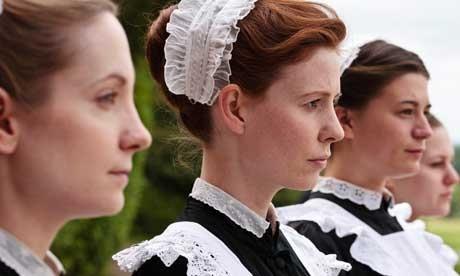 “We know the characters fairly well and, after a lay-off, are eager for more. Julian Fellowes was savvy enough to ink in their profiles in this first episode, with lines reminding us of their essence.”
Tom Sutcliffe, The Independent

“It is moreish partly for the obvious reason that Fellowes is deft at keeping a large number of characters and plots in play, but also because its author is a conservative and real change both fascinates and alarms him.”
Andrew Billen, The Times

“The world has has been shaken up and turned upside down. And this war is accelerating the process. It’s why this series could be even better than the last. That had interesting things going on beyond the grounds of Downton; this one has monumental world events, with reverberations that reach well inside, and shake the place to its foundations. Then you’ve still got all the love interest and girls in nice frocks etc. Plus class is endlessly fascinating.”
Sam Wollaston, The Guardian

“Maddeningly Spooks isn’t even true to its own account of the world, let alone the one the rest of us inhabit. At one moment, a senior Russian minister was described as virtually unfollowable because of his wily knowledge of tradecraft. At the next, one of Harry’s boys was sauntering past the boot of his car to clip on a tracker, in full view of the target and his security men. The attempts to make it topical were not too persuasive, either.”
Tom Sutcliffe, The Independent

“My theory is that by placing Spooks against Downton BBC One was burying this warhorse in its final outing. Well, it may be destined for the knacker’s yeard, but it looks set to go there snorting and kicking.”
Andrew Billen, The Times

“We had all the usual elements such as office politics, a buried past, rotten accents, a reasonably convincing action sequence towards the end and Americans up to lots of no good in the background. Hanging over it all of it though is this sad sense that no-one really cares that much any more.”
Matt Baylis, The Express

“Rather than focusing on cocaine cartels, jackbooted dictators and shanty-towns the veteran broadcaster has dug hard to find the continent’s stranger, happier side.”Matt Baylis, The Express