“An out-and-out triumph.” Read on for the verdict on the weekend’s TV. 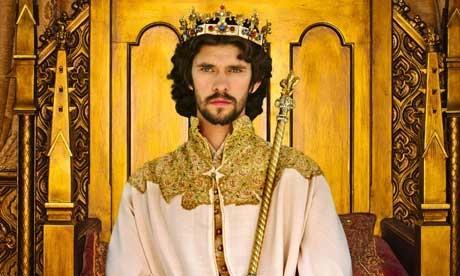 “It was an oddly and specifically mixed affair, thrillingly intense and compelling when indoors and always on the edge of provoking a giggle when outside.”
Tom Sutcliffe, The Independent

“There may have been a few too many forensic closeups – the camera sometimes seemed more interested in Wishart’s complexion than his expression – but overall it was a production of exceptional clarity.”
Tim Dowling, The Guardian

“This version will not have pleased purists, but to me Goold and Ben power’s adaptation was as beautifully cut and shaped as the topiary in the garden through which Richard’s queen wandered in Act III. An out-and-out triumph.”
Andrew Billen, The Times

“A serviceable exploration of the play’s themes, the challenge of performing it and its continuing resonance.”
Tom Sutcliffe, The Independent

“His contention that Shakespeare didn’t write Shakespeare felt like an unrelated gripe shoehorned into an otherwise illuminating investigation, but at least he graciously allowed an Oxford professor to put the other case.”
Tim Dowling, The Guardian

“Its main problem is that amusing international TV clips are a severely depleted resource, heavily subject to the law of diminishing returns – every new YouTube video of a newsreader puking on air is a bit less funny than the last.”
Tim Dowling, The Guardiancr