“More cruelty to children on TV, please.” Read on for the verdict on last night’s TV. 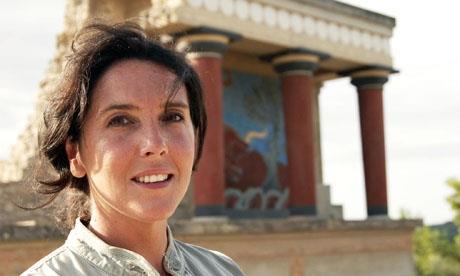 “Ms Hughes presented a very detailed case for this. In fact it would be fair to say civilisations have risen and fallen in the amount of time it took her to lay out her argument.”
Matt Baylis, Daily Express

“I imagine that she’s a bit of a magnet for the less stable viewer, and she won’t have done anything to diminish the nutcase ratio in her postbag by taking on the subject of Atlantis…The frescos at Akrotiri were dazzling and there was a genuinely poignant mystery to the fate of the people of Thira.”
Tom Sutcliffe, The Independent

“She made an attractive case. And who am I to point out  that Santorini/Thera does not actually appear to lie underwater.”
Andrew Billen, The TImes

“As [it] nears the present day the anecdotes are of markedly better quality.”
Matt Baylis, Daily Express

“A challenge that we’ve seen before in the grown-up version of the programme, but which reliably delivers a comic friction between incomprehension and artistic ambition.”
Tom Sutcliffe, The Independent

“It’s horribly entertaining. The grownup Apprentice has become a blur of sameness, but there’s still a novelty and a freshness to this. More cruelty to children on TV, please.”
Sam Wollaston, The Guardian

THREE IN A BED, CHANNEL 4