” Leslie Woodhead’s superb film followed [Bush] by interviewing anyone who mattered that day.” Read on for the verdict on last night’s TV. 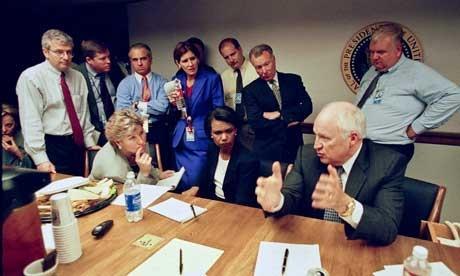 “It isn’t easy to say new things about 9/11. It’s quite hard to think of something that would really shake our received understanding of what happened on that day. 9/11: The Day That Changed the World had something reasonably special to offer. Not all their contributors were unprecedented scoops. But they’d got a lot of the West-Wing insiders who could offer a moment-by-moment account of top-level confusion.”
Tom Sutcliffe, The Independent

“The day that changed the world also divided it between those who knew what to do next and those about to be told. Leslie Woodhead’s superb film followed [Bush] by interviewing anyone who mattered that day… Donald Rumsfeld spoke of bombing Iraq. “I don’t get it,” said Richard Clarke, Bush’s counter-terrorism adviser: the perpetrator was al-Qaeda operating from Afghanistan. It had been a long day. Perhaps the Secretary of Defence was not firing on all cylinders.  The production company Brook Lapping make better television history of the recent past than anyone. It’d good to see its latest 100 minutes on ITV’s main channel.”
Andrew Billen, The Times

ELEGANCE AND DECADENCE: THE AGE OF THE REGENCY, BBC4

“I’m super-keen to channel a bit of butch Regency style,” said Lucy Worsley in her history of the Regency period. She’s super-keen full stop, frankly. Only one thing stilled her relentless cheeriness, which was unwrapping battlefield souvenirs Byron had sent back to his publishers from Waterloo.  It’s the details that do it.”
Tom Sutcliffe, The Independent

“I was hooked. For this wasn’t really a film about Irish dancing world championships so much as one about obsession. No one felt the need to apologise for doing something so uncool: better still, no one bothered to explain. None of the dancers felt they were doing anything abnormal. The lack of engagement in this debate became a defiant celebration. You either got it or you didn’t.”
John Crace, The Guardian

“Sean Foggett is a man with an obsession. Sean is mad about crocodiles and wants to collect all 23 species of them. He has chosen to give up his job, sell his house and move his wife and kids in with his brother’s family to set up his own crocodile attraction in an industrial park just outside Witney in Oxfordshire. Best viewed form behind the sofa. Not because the crocs are so scary but because watching the iron-grip of Sean’s delusion tightening by the second is X-rated stuff.  A bite from an American alligator would be less painful than watching this.”
John Crace, The Guardian

“For the joy of hubris, unbeatable. A couple of years ago, Ted and Sarah had completely ignored many of Ruth Watson’s suggestions for the restoration of Pentillie castle in Cornwall. I Imagine part of [Ruth’s] desire to return – apart form making cheap TV – was to see just how much Ted and Sarah had cocked things up. But the business was thriving.”
John Crace, The Guardian

“Formerly quite useful and entertaining in her role as channel 5’s Hotel Inspector, Ruth seemed out of her depth here, revamping an ailing stately home.”
Matt Baylis, The Express

THE STORY OF BRITISH PATHÉ, BBC4

“It was when tastes became more complex that the old newsreels began to fail. Pathé tried hard to keep abreast of the times but sounded stiff and condescending. All the producers were men, which was why most items when they weren’t sneering at youth fashions, featured young women in swimsuits. How sad to think of the nation’s pal turning into a leering granddad, John Mills becoming Benny Hill.”
Matt Baylis, The Express