“A sugary pudding of groans and cliches.” Read on for the verdict on last night’s TV. 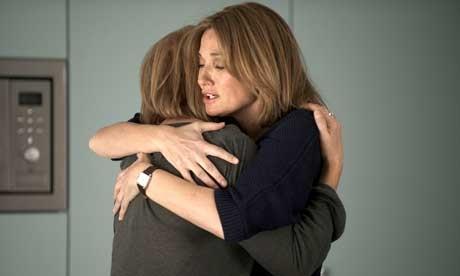 “The foursome proved as strong as they have been feisty, a notable improvement on the soppy starlets who occupy the programme’s sibling shows: Sex and the City, Desperate Housewives et al. Mistresses may have taken a turn for the darker, but it is far from a turn for the worse.”
Alice-Azania Jarvis, The Independent

“It is ridiculous, preposterous even, certainly wrong, a sugary pudding of groans and cliches. And it’s ever so slightly addictive.”
Sam Wollaston, The Guardian

“If the dwelling didn’t look as spectacular as the women who inhabit them, it wouldn’t be half as much fun…Mistresses is as pleasurable as eating a cupcake.”
Virginia Blackburn, Daily Express

“The BBC has discovered someone who’s into this stuff and who doesn’t have a beard, and they’re going to milk her for all she’s worth… OK, it’s pretty fascinating, once you get to the human stories.”
Sam Wollaston, The Guardian

“Alice Roberts made a good case that digging through the written archives isn’t good enough for a historian. You need t o get your fingers dirty.”
Andrew Billen, The Times

“It’s not just a break from the monotony of the channel’s hospital/police office/chat-room-heavy roster; it’s a genuinely interesting display of possibilities…It was very short indeed: only half an hour. It was a shame…At least, though, the curtness of our encounter left us wanting more; far better that way than the other.”
Alice-Azania Jarvis, The Independent

“It’s a real-life soap opera. Stranger than fiction and all that. You couldn’t make it up.”
Virginia Blackburn, Daily Express