“Less of an in-depth political documentary and more like CCTV footage from the court of Ivan the Terrible.” Read on for the verdict on last night’s TV. 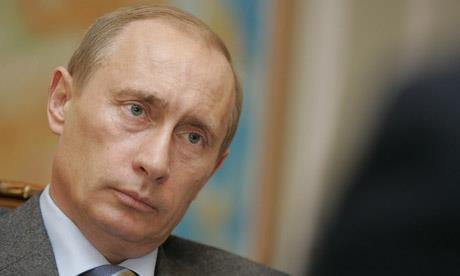 Putin, Russia and the West, BBC2

“Percy’s stock in trade is history that gets inside the room. She has an unequalled track record when it comes to persuading the chief actors in contemporary events to give their versions of what happened behind closed doors, all the while keeping a beady eye on the fact that their version is bound to be highly partial. But the nature of Russian politics means that there are some occasions that still elude full disclosure.”
Tom Sutcliffe, The Independent

“What sets this series apart from others is the sheer quality of the material. The interviews and the footage would be hard to better. From Colin Powell to Condolezza Rice to Putin himself and figures such as German Gref, the former Economic Minister and the man whose fraught reading of a Bill making it legal to buy and sell land in Russia prompted that infamous punch-up on Russian Parliament, major players are here, on camera – and in surprisingly confessional mode.”Sarah Vine, The Times

“Less of an in-depth political documentary and rather more like CCTV footage from the court of Ivan the Terrible.”
Matt Baylis, The Express

“The scene is characteristic of Leo Maguire’s powerful observational documentary, both in the artful way it is filmed (maybe a teeny bit too artful, I thought, at times: I could have done with less lingering on poppy fields etc and the whole thing fitting into an hour) and the cruelty and violence of the subject matter.”
Sam Wollaston, The Guardian

“To be fair to the makers of this film and the people who took part in it, there is something unique about the gypsy view of fighting. People, not just angry men but mothers and grandmothers, spoke of the urge to fight as something almost mystical, a quality that was in the blood and passed down through generations of gypsies without any outside influence.”
Matt Baylis, The Express

“It is back – to see whether it can pull off the trick of re-engineering a really good end-stop drama into a continuing series.”
Tom Sutcliffe, The Independent