“It offers a slice of oddball humour quite unlike anything else to be found.” Read on for the verdict on last night’s TV. 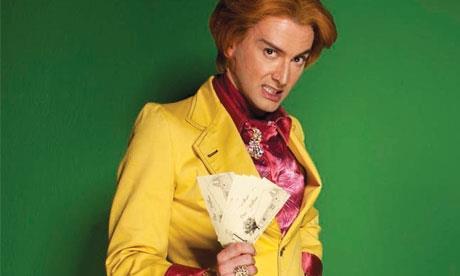 This is Jinsy, Sky Atlantic

“It’s part Yellow Submarine, part Hitchhiker’s Guide, part League of Gentlemen. Written by its two stars, Justin Chubb and Chris Bran, it offers a slice of oddball humour quite unlike anything else to be found.”
Alice-Azania Jarvis, The Independent

“Within Jinsy anything goes: talking seagulls; a talent show judged by a dog; preposterously long-armed folk singers to recount it all in a ditty. It’s like watching a hyperactive kid who’s been taken off the Ritalin and instead given his own space to go bonkers. The trouble is, that child is quite exhausting to watch and not always funny.”
Alex Hardy, The Times

“Last night I think I clocked Chelsea’s problem. It’s the way they talk. Not the rounded vowels and plummy tones, that’s fine. It’s the endless droning monotone whichmakesallthewordsblurintoonesoporipicburrr. That, and the fact that the people are awful.”
Alice-Azania Jarvis, The Independent

“It’s priceless, the cake exchange. It all is, a window into an extraordinary world I feel so alien to that it’s like watching a wildlife documentary. We’re talking different species here. And I’m pretty sure I wouldn’t even be allowed into the cake shop. Well, it’s not Greggs, is it?”
Sam Wollaston, The Guardian

“Throughout, little speckles of humanity shone through. Like the moment a pair of room-mates realised, three days in, that they still didn’t know each other’s first names, so accustomed had they become to barking surnames at each other. And, more movingly, the day that a young Vernon Kay-alike, Darrock, attended the funeral of a friend who died while on a tour of duty.”
Alice-Azania Jarvis, The Independent

“It’s a fabulous documentary, though – purely observational, nonjudgmental, refreshingly lacking a comedy narration from someone who was once in Green Wing. The viewer decides what to think. Someone else watching might see a fine old institution, noble traditions, perhaps even a wake-up call to go and serve Queen and country.”
Sam Wollaston, The Guardian

“With its centrepiece gimmick a restored 1967 mobile cinema, Melvyn set up his stall outside Birmingham’s College of Medical and Dental Sciences. This was an apt location because the footage covered the birth of the NHS.”
Matt Baylis, The Express

“I really couldn’t care less about the impending marriage of Carla and Frank.  Yesterday was a Monday, which meant a double helping from Weatherfield. This in turn meant that any wedding scheduled to take place wasn’t going to happen as never does so early in the week.”
Matt Baylis, The Express