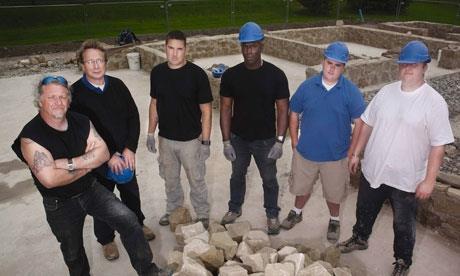 “There was an arsenal of injuries for our builders, and very, very slow progress. It wasn’t riveting viewing. Over the course of an hour, I learned a lot about ancient cement, but rather less about ancient Rome.”
Alice-Azania Jarvis, The Independent

“In one of television’s more pointless exercises, the programme has decided to build the first ‘authentic’ Roman villa in Britain for 1,600 years, using only the techniques and instruments available to the Romans. Some sharper editing could really have made this programme sing, as a comedy. Unfortunately, it kept getting distracted by history.”
Andrew Billen, The Times

“You learn a little bit about ancient Rome, and about how they did things, but the educational side has been cunningly disguised, so it doesn’t feel too much like homework. It’s Simon Schama meets Grand Designs meets Time Team meets Auf Wiedersehen, Pet (especially with Kevin).”
Sam Wollaston, The Guardian

“In London, a critic abandons a career of carping to acknowledge that Human Planet is amazing, five-star television.”
Andrew Billen, The Times

“Goodness, Human Planet is good. This week’s episode was all about deserts, and the people who live there.”
Alice-Azania Jarvis, The Independent

Secrets of the Blitz: Revealed (Channel 5)

“Diligently researched and not a little unsettling, this fascinating programme showed how close we came to defeat and how our own government’s tactics sometimes echoed the surveillance and suppression of the Nazi regime.”
Matt Baylis, The Daily Express