“It is a testimony to the power of Beeny love that anyone has dared to put a second series out in our new era of austerity.” Read on for the verdict on last night’s TV. 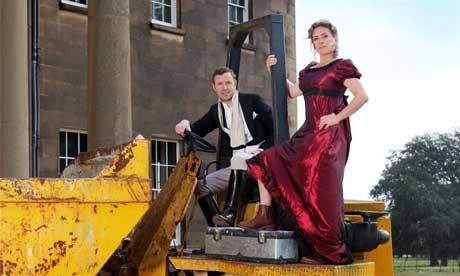 “It is a testimony to the power of Beeny love that anyone has dared to put a second series out in our new era of austerity.””
Lucy Mangan, The Guardian

“[It] still has the habit of conjuring happy endings that contradict its title… But there is no doubt that Rise Hall is a folie de grandeur that could cost the family dear, and my hackles, raised in envy, are flattening.”
Andrew Billen, The Times

“The truth that Alagiah’s programme seemed to hint at was that what the race purists had feared all along really is coming true; more and more people just don’t care, and the less they do, the harder it becomes to keep bigotry in good repair. It’s not over yet, but even so this was a genuinely heartening series.”
Tom Sutcliffe, The Independent

“This episode – perhaps inevitably given the period covered – told us little more than most viewers would either remember or that would come under the heading of “common knowledge or sense”.
Lucy Mangan, The Guardian

SHOCK AND AWE: THE STORY OF ELECTRICITY, BBC4

“The history of electricity seems to have been full of these entertaining details, which is lucky for Professor Al-Khalili and his audience because there are few subjects more boring than electrons and semi-conductors.”
Matt Bayliss, Daily Express

“Subtitles would occasionally be helpful, but I laughed a lot.”
Tom Sutcliffe, The Independent

“The American police ensemble that became less of an ensemble with every season as its cast was cut back for cost reasons. Yet its quality continues to grow… If the pace could just slow a bit and the characters get some space, this very good cop show could become something special.”
Andrew Billen, The Times